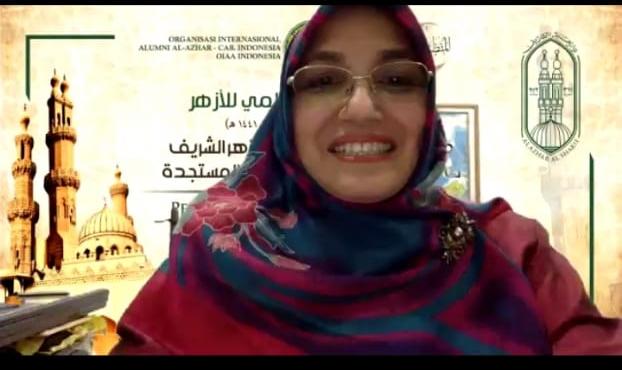 Ciputat, UIN News Online – Rector of UIN Jakarta Amany Lubis invites all alumni of Al-Azhar University, Egypt in Indonesia to support the community and the government in dealing with the Covid-19 Pandemic. This support is expected to accelerate the handling of the impact of the Covid 19 virus in the country.

This was said by the Rector during her remarks at the al-Ihtifal bi-l Yaum al-Alamy li-l Azhar entitled Mawaqif Diniyyah wa Insaniyyah li-l Azhar al-Syarif fi Muwajahah Virus Corona al-Mustajiddah’, Saturday (05/02/2020). Referring to official information from the central and regional government authorities, the spread of the Covid 19 virus has been so massive. Not only in urban areas, the spread of the virus has also begun to spread in various other regions.

“In addition to casualties, exposure to the virus also presents social effects that require our attention,” she said.

The social effect, she said, aside from discussing the discourse on the procedure of worship amid the threat of a pandemic, also had an impact on other sectors of the economy, education, and others. In economic activities for example, the outbreaks had a serious impact on the availability of the employment sector.

“These issues need our attention (the alumni of al-Azhar University-ed),” she said.

The forum, which was held online starting at 20:00 WIB until 22:30, was attended by hundreds of al-Azhar alumni in various regions in the country, including alumni who served at UIN Jakarta. In addition to Amany Lubis, there are several prominent Al-Azhar alumni who participate in the event, such as Professor Al-Azhar Muhammad Quraish Shihab, TGB Muhammad Zainul Majdi, and Dr. Habiburrahman El Shirazy.