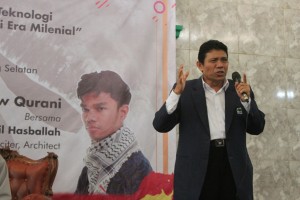 Also present at the opening of this event, Vice Rector for Student Affairs of UIN Jakarta Prof Dr Yusran Razak MA. In his remarks, Yusron expressed his deep appreciation to LDK Syahid who has carried out various Islamic activities in UIN Jakarta campus.

“UIN Jakarta expressed its gratitude to LDK Syahid who took part in realizing the vision and mission of UIN Jakarta in creating the good character Muslims,” said Yusran.

According to Yusran, the activities held by LDK Syahid are very helpful in fostering religious guidance for the students, such as inviting new students to read and study the Qur’an.

“A very positive activity, hopefully all these good deeds will be rewarded from Allah SWT,” he said.

During the activity, the committee conducted fundraising for the Muslims, both those affected by natural disasters in Wonogiri and Muslim in Palestine, Rohingya, and elsewhere. Based on the committee’s record, the funds collected amounted to Rp 750,000.(usa)