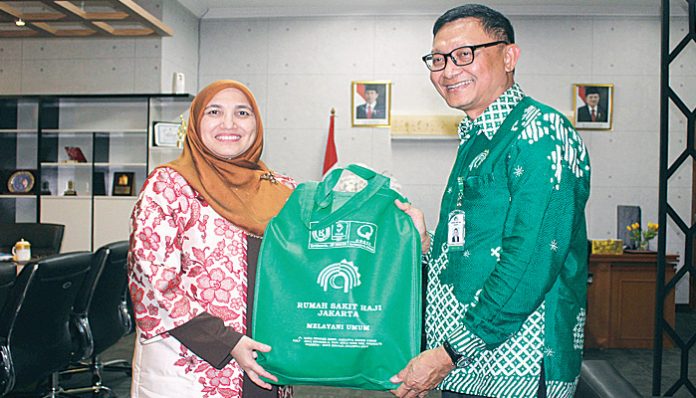 Rectorate, UIN News Online – Rector of UIN Jakarta Amany Lubis, when meeting with RSHJ President Director Syarief Hasan Lutfie in the Rectorate Building on Thursday (01/31/2019) , stated that the collaboration with RSHJ was important, until now the University’s Faculty of Medicine did not have its own teaching hospital. The Rector stated that RSHJ had a good reputation, followed Sharia regulations, and was accredited.

“In order to increase the quality of service and quality of Faculty of Medicine alumni, God willing, UIN Jakarta will soon work together with RSHJ,” said the Rector.

She also stated that UIN Jakarta’s Faculty of Medicine had in fact already worked together with several hospitals in Jakarta and in the outer regions. However, she believed that collaboration should still be useful as a means to improve the quality of the University’s future doctors.

“There are 12 hospitals that have worked together with UIN Jakarta. The collaboration with RSHJ, I think it is good for improving the Faculty of Medicine as it does not yet have a teaching hospital,” the Rector said.

RSHJ President Director Syarief Hasan Lutfie welcomed the collaboration with UIN Jakarta’s Faculty of Medicine. The collaboration would be established mainly to accelerate the process of getting the faculty accredited.

Syarief stated that RSHJ was both worthy and fulfilled the requirements of becoming a teaching hospital. RSHJ could help the faculty’s students during medical practice training and research.

“Having said that, before there was ever any cooperation, many medical students trained in RSHJ. When the collaboration starts, certainly we will develop and expand that,” explained Syarief.

According to Syarief, RSHJ is currently owned by the Ministry of Religious Affairs. As a result, the decision would be up to the Ministry. Whether or not the Ministry would be interested or not in working together with UIN Jakarta was not yet confirmed.

“So, on the issue of how RSHJ is managed in the future, we leave that fully to the Ministry of Religion,” he said.