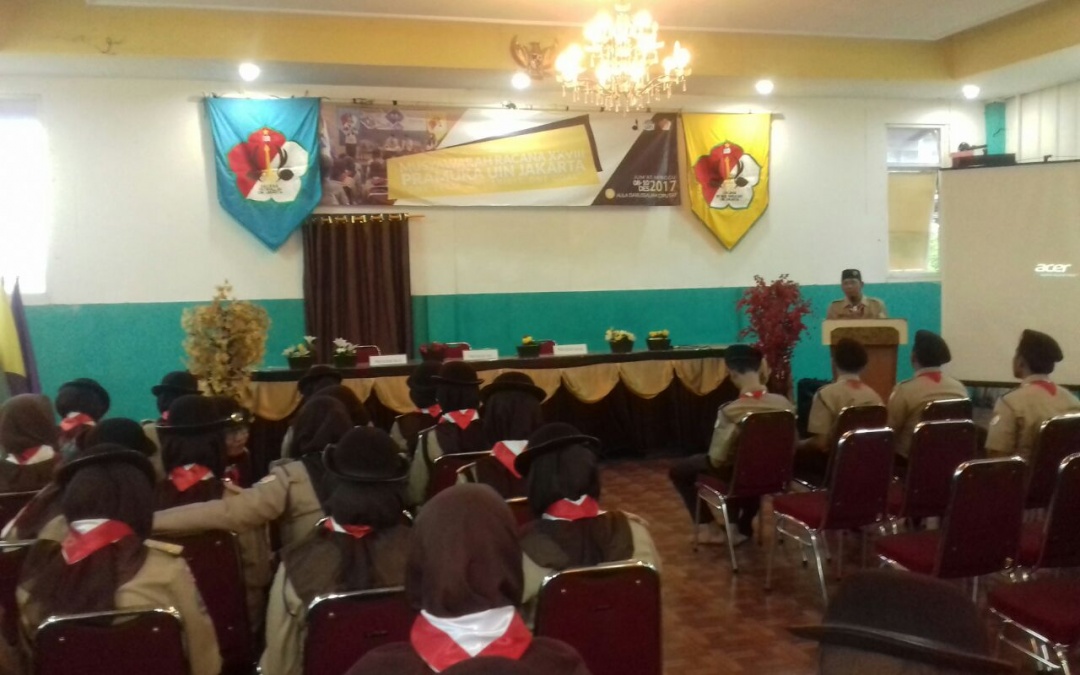 Ciputat, UIN NEWS Online – The Scout Movement of UIN Jakarta held the 28th Racana Meeting (Musyra) in YPI Darussalam Hall, Ciputat, South Tangerang, Banten, on 8-10 December 2017. The Pandega Scout’s annual meeting discussed a number of important agendas, including the change of the old board in 2017 and elected the new board of 2018 period, and create a work plan in 2018.

Musyra opened by Coach of Front Cluster Nanang Syaikhu, Friday (8/12/2017), and attended by members, including senior 2017 Chairman of Male Racana Pandega Wahyu Fahmi Rijali, in his speech stated, he will end the term of office for one year. Next will be elected new chairman and other board for the period of one coming period.

“As Chairman of the Racana, I would like to thank the dedication of the Racana Board for a period of office. Insha Allah we will choose the leaders and managers of the new Racana organization for the ongoing leadership of leadership in scouting education in UIN Jakarta, “he said.

In addition to expressing his thanks, Wahyu also asked for his apology if during the board at Racana he had mistakes and shortcomings. Even to the coaches and seniors, Wahyu also descended to express his gratitude for his encouragement and guidance during carrying out the mandate of the previous mushra.

Coach of Front Cluster Nanang Syaikhu in his speech reminded that the musyra this year run well and more qualified. Musyra is one of the organizational learning forum at Racana level for students, so it is expected during the deliberation of the meeting does not emphasize the emotional attitude but with cold head.

Musyra, Nanang said, essentially as a deliberative study to solve the problem. Therefore, deliberation is good, democratic, and with a cool head.

“Discuss each issue in the organization and program clearly. Do not make unnecessary debate and deviate the core deliberation. If there are issues that are not too substantive to discuss, do not be widened everywhere because it is very counterproductive, “he explained.

The agenda of the 28 th day of the 28th  Musyra that will last until December 10, 2018 begins with a preliminary hearing with an agenda of endorsement of the schedule, the order of the session, and the election of the court presidium. After that proceed with the accountability report 2017 board and general view. (usa-rs)