Rector in her remarks expressed her appreciation for the launching of this study center. As an Islamic university, she said, the existence of this center will complements the contribution of UIN Jakarta in the development of religious life and Islamic knowledge.

“Hopefully this study center can accommodate all activities related to the Koran. Both in terms of recitation, interpretation, creativity, and other innovations that allow people to be close to the Al-Quran,” said Rector.

Amany also added that Al-Quran is a source in the development of people’s lives by exploring the knowledge through study (tadabbur) of each verse. “Understanding the Koran in a tadabbur way is considered very important. And we hope this institution can invite us to study the Koran,” she said.

Furthermore, Rector Amany also hopes that the Al-Quran Study Center can create innovations that allow the Muslim community to be close to the Al-Quran through their smart devices. According to her, adopting digital media in learning the Koran is very important in the direction of today’s digital civilization.

Meanwhile, Faizah in her remarks expressed for all the support given by the leadership of UIN Jakarta in inaugurating this study center. According to Faizah, apart from encouraging Al-Quran literacy among students and academic community of UIN Jakarta, the study center is expected to make a major and positive contribution to the Muslims religious life in the country.

“As a university that upholds Islamic values, UIN Jakarta is also required to fulfill the needs of the millennial generation. This is why today we are launching the study center. Hopefully this will become a forum for fostering Al-Quran reading and writing among students, academicians, and the public,” said Faizah. 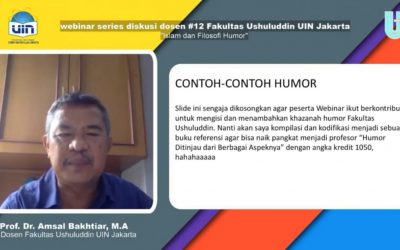