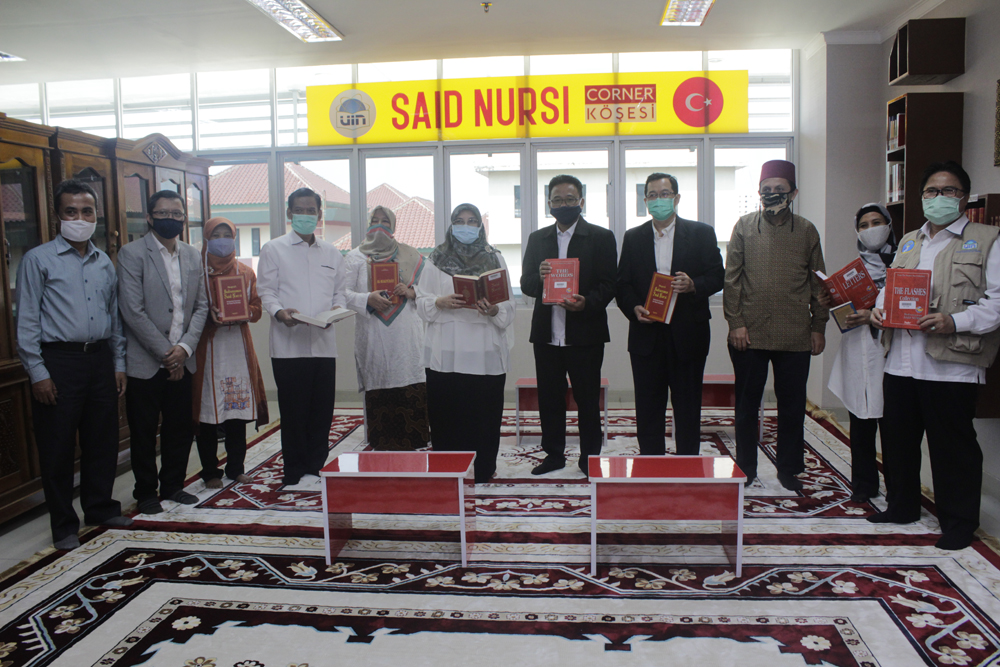 Rector Amany Lubis in her remarks positively welcomed the opening of Said Nursi Corner. According to Amany, the Said Nursi Center will be very useful in providing extensive information to the public about the history of Islamic reformer from Turkey, both in the fields of Sufism, kalam science, history, and language.

“So, if we want to know about the concept of scientific integration at UIN Jakarta, we can see it from the results of Said Nursi’s thoughts,” said Rector.

Examples that Said Nursi’s thought in integrating his science can be seen from his famous wise words: ‘Minds should be enlightened with science, and hearts need to be illumined with religion. If the two are combined, the essence will be revealed’.

Therefore, Amany said that the Islamic and scientific thoughts possessed by Said Nursi were undoubtedly. She also said that what was written in Said Nursi’s books was very relevant to the current context.

“He produced a variety of qualified intellectual works which were admired not only in Turkey but also in the Islamic world,” said Rector.

Meanwhile, Said Nursi Corner Director Muhbib Abdul Wahab said, the establishment of Said Nursi Corner was the result of a follow-up of cooperation between the Nur Semesta Foundation and UIN Jakarta. The cooperation had been agreed for a long time, but due to Covid-19 outbreak, the inauguration was delayed.

Muhbib hopes that the Said Nursi Corner at UIN Jakarta can provide a positive perspective for scientific development, both for study and research. Therefore, lecturers and students can easily interact with the various works and thoughts of Said Nursi.

“Students, lecturers and anyone can read Said Nursi’s works which are spread in various parts of the world. Because, Said Nursi’s works have been written and translated into four languages, namely Turkish, Indonesian, Arabic and English,” he said.