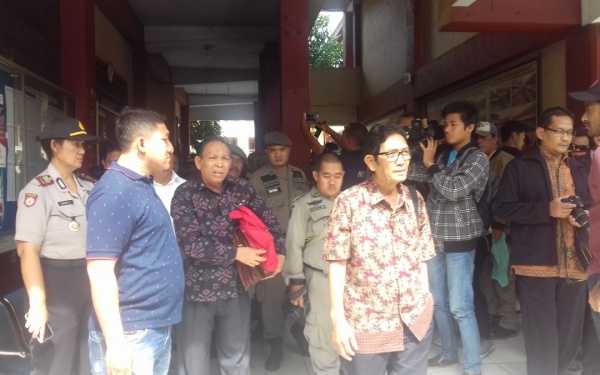 Ciputat, UIN NEWS Online – State Attorney of Tangerang managed to confiscate a school building in Cempaka Putih, East Ciputat District, South Tangerang, Thursday (28/12/2017). Confiscation of assets belonging to the Ministry of Religious Affairs c.q. UIN Jakarta was conducted after officers from the Tangerang City State Attorney read the verdict in place of the object of execution.

No significant resistance from the executed party. Drs Nurdin Idris MPd as the Trustee and Chairman of the Foundation of Islamic College Triguna Utama (YPITU) who was at the location was successfully expelled even though had previously argued with the prosecutor’s office. Not only Nurdin, other board members,  Drs Nasrun Mahmud MPd who is also a lecturer of the Faculty of Tarbiyah and Teacher Training UIN Jakarta, as well as their two lawyers was also successfully removed from the place.

“Alhamdulillah, the building is now successfully returned to the country after controlled by a number of civil servants of UIN Jakarta,” said Head of General Section of UIN Jakarta Drs Encep Dimyati MA after signing the minutes of execution.

“The clearance order has been long enough. However, because the concerned (Nudin Idris cs, Red) does not move, yes we evicted them by force,” said Encep.

After successfully forcibly evicting the board of the foundation, officers from UIN Jakarta and then put a signboard of UIN Jakarta at the entrance. In addition, the entire door of the room and the entrance of the college entrance also padlocked  by the officers.

“No one can get in and out,, except the appointed security guards and police,” he said. (usa)