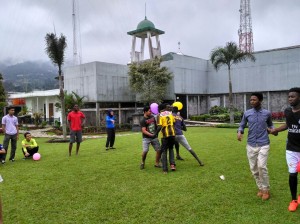 The head of CIC Rachmat Baihaky, MA explained that this event was held to establish the closeness among the international students after taking Mid Semester Exam (UTS) this year.

On the second day, the international students are mingled in the Poco-Poco dance. They seemed very enthusiastic in following the movements of Poco-Poco dance guided by the organizers and continued by another game such as Balloon Dance and Siapa Paling Panjang.

Furthermore, the event was also punctuated with Sharing Session. Most of them are complained about the difficulties in understanding the lectures given which are delivered in Bahasa. Jainaba Trawally for example, the student from the Faculty of Science and Technology (FST) admitted that the Indonesian language training only prepared for approximately nine months.

â€œAlmost all the lecturers spoke rapidly in Bahasa, and I find it difficult to understand,â€ said Jainaba.

In response, Rachmat Baihaky said that all International Students are required to master the Indonesian language, as well as Indonesian students who were studying in other countries which have to master the language of the country where he/she is currently studying.

â€œWe have given them training for nine months, perhaps, they need more time to adapt,â€ he said.

If they are proficient in Bahasa, they are later expected to become the ambassador of Indonesia in their respective countries to introduce UIN Jakarta and Indonesian culture.

At the end of the event, the International Students are given the opportunity to show the culture from their respective countries in the Cultural Performance session.

Students from Gambia, for example, they presented the marriage procession from their country. It was started with the advice ritual from the elders to the bride at the brideâ€™s house, and followed by the parade to the groom’s house with traditional dances from Gambia.

â€œHopefully this event can cure their boredom can reinforce their intention of studying in UIN Jakarta and to strengthen the tolerance which is built among them,â€ said one of the organizers, Dzikri Nurhabibi to UIN News Online. Â (usa)