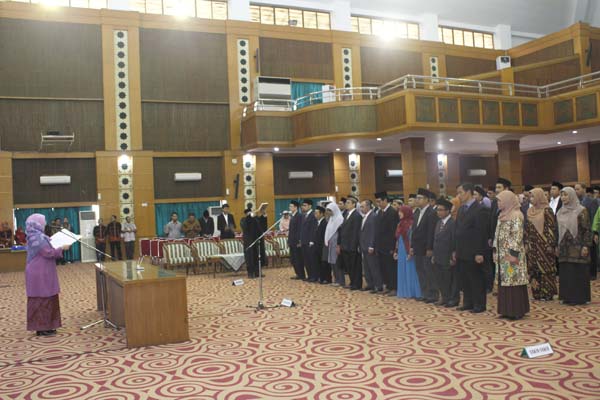 The 82 officials consisted of Vice Deans, Secretary of SPs, institutional heads, as well as division and sub division head in UIN Jakarta.

Rector in her speech congratulates the newly appointed officials and hopes that they can carry out their respective duties with full responsibility. “This is a mandate given by Allah, hopefully we can carried out this mandate properly,” said Rector.

On the same occasion, Rector also delivered her deepest gratitude to the previous officials who had contributed greatly to the progress and improvements of UIN Jakarta.

“Thanks to their hard work, UIN Jakarta has now obtained the best accreditation at the national Higher Education Institution Accreditation (AIPT),” said Amany.

To the new officials, the Rector also invited them to synergize with all elements in UIN Jakarta.  “We must synergize to realize the ideals of UIN Jakarta towards an internationally recognized university,” she concluded. (usa)