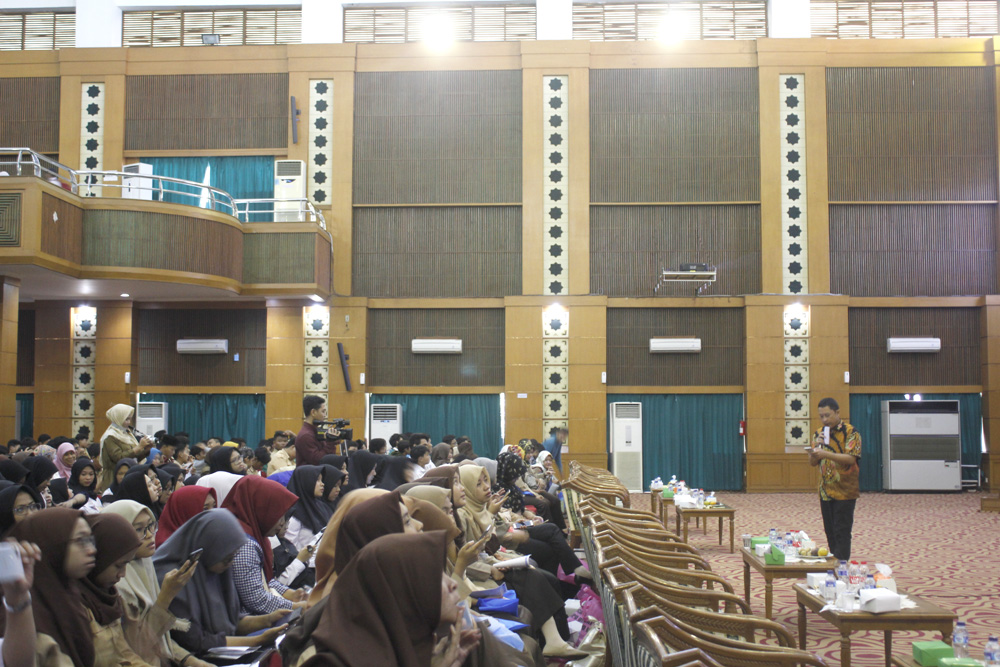 Main Auditorium, UIN News Online – UIN Jakarta holds socialization of the new student admission system for 2019/2020 academic year. The socialization program was held at the Harun Nasution Auditorium on Wednesday (01/30/2019), along with the opening of the 5th UIN Education Expo in 2019.

This socialization is aimed at 12th grade students. They come from various schools (SMA / MA / SMK) in the Jabodetabek area. The socialization material was delivered by Sub-division Head of the Publication and Documentatary of UIN Jakarta Samsudin.

According to Samsudin, the admission process can be done through five enrollment types; SNMPTN, SBMPTN, SPAN PTKIN, UM PTKIN, and SPMB Mandiri. SNMPTN and SPAN PTKIN are national selection systems based on academic (report) and non-academic achievements, while the SBMPTN and UM PTKIN are national selection systems in the form of written (paper) and computer examinations.

“While the SPMB Mandiri is an independent (local) selection or examination system organized by UIN Jakarta in the form of a written examination,” said Samsudin.

Samsuddin said that the registration of new UIN Jakarta students had been opened, except through SNMPTN and SPMB Mandiri. “The SNMPTN line was closed on January 25, while the SPMB Mandiri has not yet been opened because it is still a preparation process,” he explained.

Syamsuddin also explained, each student or school must pay close attention to all stages of registration that are opened on each enrollment types.

“Therefore, I suggest that active students ask if there is unclear registration information,” he said. (usa)