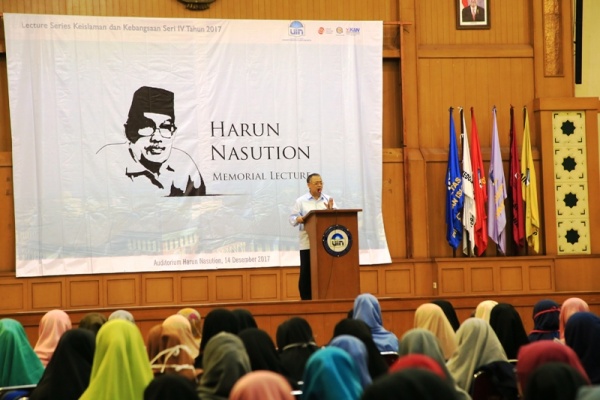 Harun Nasution Memorial Lecture was held by presenting two professors of UIN Jakarta, Prof. Dr. Yunan Yusuf and Prof.Dr. Suwito. Known, they were both students who had been educated by Harun. Additionally, they later became a colleague of Harun as a lecturer at UIN Jakarta.

In his presentation, Yunan said that Harun is a very disciplined and rationalist intellectual figure. As an intellectual patterned rationalist, he added, Harun positioned Islam not only seen from one aspect or fixed on one madzhab only.

“Islam must be widely viewed, though it is entirely back to the affirmation of the Tawheed of Allah SWT. That way, Islam is not only about worship but Islam also includes history, civilization and politics,” said Yunan.

This perspective is reflected in one of the important works of the late Harun Nasution, Islam Ditinjau dari Berbagai Aspek. The book has been published repeatedly presents Islam as a multi-faceted religion, namely theological, historical, political, cultural and others.

While Suwito said that Harun Nasution is a figure who has a commitment in education. According to him, Harun is an intellectual figure who prioritizes teaching students rather than attending bureaucratic meetings.

Rector of UIN Jakarta Prof. Dr. Dede Rosyada MA who also became one of his student revealed the great influence of Harun Nasution for the scientific tradition at UIN Jakarta. His extraordinary thoughts can affect the mindset of moderate students.

“The mindset of the late Prof Harun is the synergy between Islam, modernity and all things related to Indonesia. This thought eventually becomes an important foundation for UIN Jakarta academic community

Dede added, the great influence of the thought of the late Harun Nasution is driven by two factors. One of them, transmitted through scientific role and education of its students. “Many of his students who now have the tittle of professor and have scientific roles in each respective field,” he explained.

Another factor, he continued, is transmitted through his works that are still being read and studied until now. Some of them are Akal dan Wahyu dalam Islam, Filsafat Agama, Islam Rasional, Teologi Islam, Islam Ditinjau dari Berbagai Aspeknya.

Rector also added, the figure of the late Harun also eligible to be an example. According to him, when there is a teaching schedule, Harun always comes before the lecture begins so that lectures can begin on time. “He even reluctantly accepted invitations that hampered his teaching schedule,” he added.

More than a teacher and leader, he continued, the late Aaron is a father figure for every student. He fully supports his students to pursue their studies, he even finances the students who are exposed by financial problems.

It is known that the late Harun Nasution himself was born in Pematang Siantar on September 23, 1919 and died in Jakarta on September 18, 1998. The deceased who once led UIN Jakarta (formerly, IAIN Jakarta) during 1973-1984, had studied at Al-Azhar University and American University of Cairo and McGill University, Canada. (usa-rs)