UIN Jakarta holds discussion on the integration of science 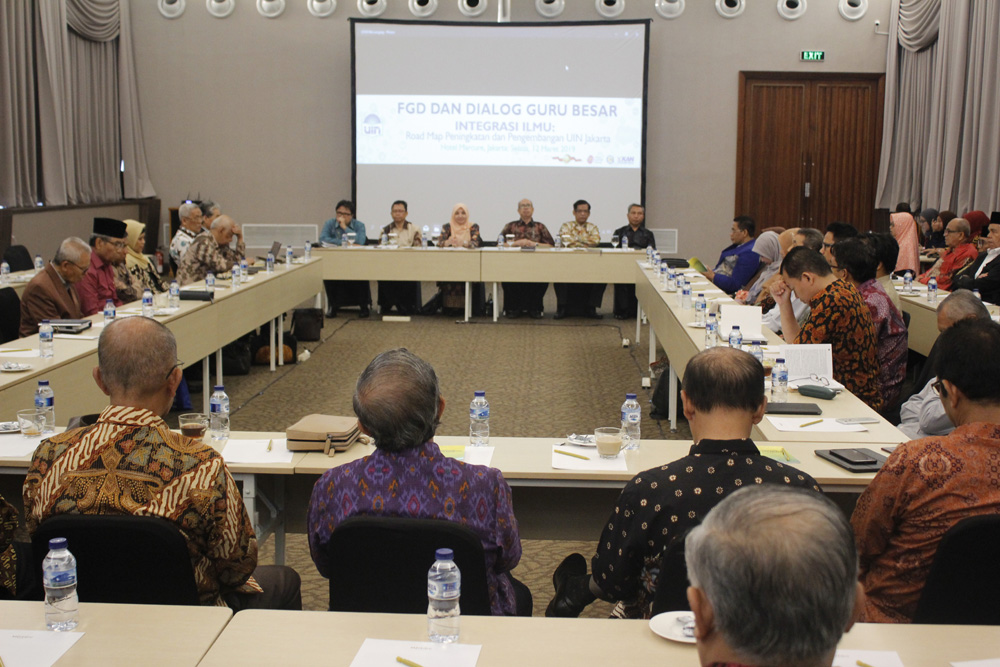 According to Amany, the integration of science idea at UIN Jakarta is very important to be discussed. The integration of religious and general sciences needs to be resolved immediately. “For this reason, we need to get input from professors in accordance with their respective scientific capacities,” said Amany when she opens the meeting.

The Chancellor revealed that the problem of scientific integration at UIN Jakarta had been strengthened by the Rector’s Decree Number 864 of 2017 concerning on the Guidelines for UIN Jakarta Science Integration. The decree, which contains 6 articles was intended so that the direction and development of science in UIN Jakarta was in line with the transformation from IAIN to UIN.

In his presentation, the Chancellor also mentioned at least seven characteristics of scientific integration at UIN Jakarta. First, humanism, which explores human, imani, and natural potential and evolutionary humanization in the field of social sciences and prophetic realms; Second, internalization of Islamic teachings that develops faith and intellectuality in a multidisciplinary manner by developing a philosophy of science that has three branches, namely ontology, epistemology, and axiology.

Thurd; is two-way traffic, which explains the relationship of science and religion as well as the provision of religious propositions on science and scientific arguments on matters related to religious teachings; Fourth, the interpretation of knowledge for Nash by utilizing the scientific revolution that exists in each era and still adhering to the principles of correct interpretation and agreed upon by scholars (intellectuals). Fifth, washatiyah in Islamic teachings is applied to the field of education in an open-minded manner by combining Islamic, Indonesian value, social, and natural aspects.

Sixth, scientific traditions are strengthened for the development of science and technology and competitiveness in all fields of science and profession. “Then seventh, there needs to be motivation for discovery and innovation for the benefit of humanity,” he explained.

In response, Azyumardi Azra welcomed the idea of UIN Jakarta’s Rector who invited all professors to discuss the integration of science. According to Azra, the paradigm of integration of science must be based on a mutual agreement among the professors. The paradigm is important so that scientific characteristics can be found that are in accordance with the enthusiasm for the development of UIN Jakarta.

Azra also said, experts must exchange ideas in implementing between the verses of kauniyah and verses of Qur’aniyah. If not, then there will be no such thing as integration of science. “This is what the UIN Jakarta leaders must do now. We all must agree on the scientific integration paradigm,” said Azra.

In line with Azra, Komaruddin Hidayat also said that the meeting of professors to discuss the problem of integration of science at UIN Jakarta was a very substantive matter in the scientific field. “At least, this forum will became the initial formula and then followed up at the next meeting,” said Komaruddin. (usa)