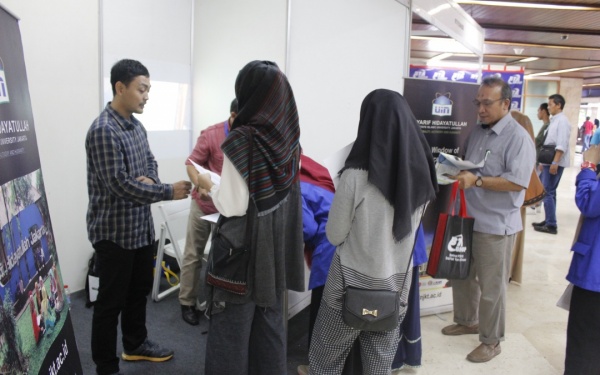 Jakarta, UIN News Online – A number of High School students, on Sunday are came to visit UIN Jakarta’s booth at the Bimbingan Tes Alumni (BTA) SMAN 8 Jakarta exhibition, on Sunday, (2/5/2018). They seemed so eager to ask questions and asking for information regarding UIN Jakarta. In addition to UIN Jakarta, the exhibition which is held at Gedung Manggala Wanabakti is participated by dozens of other state or public national universities.

Since the opening of exhibition, UIN Jakarta booth is always crowded by visitors. Most of them are students from high school / vocational school or madrasah aliyah.

When met by UIN News Online team, one of UIN Jakarta Booth Assistant Hermanudin Jamil said that UIN booth Jakarta became one of the most visited booth by the students.

In addition to asking about the faculty and courses offered, visitors also ask about accreditation, the tuition fee, scholarship opportunities, and student activities.

Based on UIN News Online observation, UIN Jakarta’s booth always been flooded with the visitors since 08:00 in the morning until closed at 16:00 afternoon. In addition to their own, the students often come in groups or accompanied by their parents. (usa)