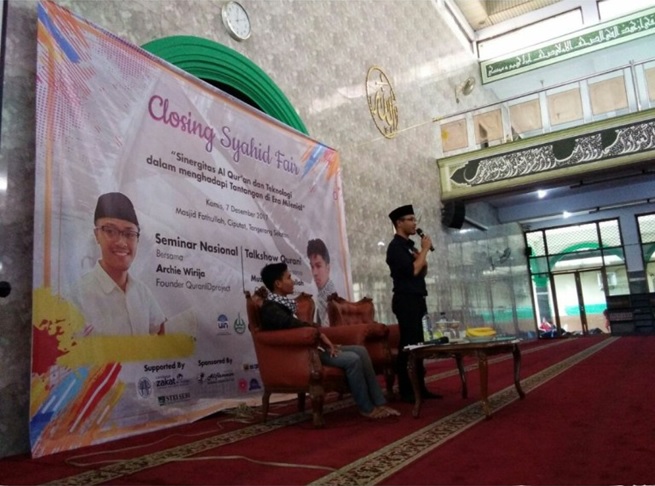 Founder of Qur’an ID project Archie Wirija who was lined up as one of the speakers in the event titled “The Synergy of the Qur’an and Technology in Facing Challenges in the Millennium Era” explains, Qur’anIDproject is a startup that moves in the field of audio al-Qur’an result of initiation of young generations of Islam.

He explained that the Qur’an Indonesia Project or Qur’anIDproject provides a platform for young people today who can’t be separated from the gadget in order to always access the Qur’an in the form of audio reading paragraph readings with Arabic, Indonesian, and English are easy accessed via the web with downloadable applications for free.

“This positive work is actually my own. First, I started it alone, then begin to research, and tried to make it as a project,” said Archie Wirija to approximately 600 participants who attended.

Disclosed, Qur’anIDproject currently has about 300 contributors and 27,043 users. With the product, he wants to bring people back to al-Qur’an.

“The Qur’an is revealed to all humans. Then why do not I want to read the Qur’an just because I do not read al-Qur’an?” Said the man who was born on May 8, 1989.

Meanwhile, Muzammil Hasballah as a second source known as the young Imam of Salman mosque ITB appear to provide motivation to participants to take time to interact with the Qur’an.

“Do not hesitate to be close to the Qur’an, interact with the Qur’an as best you can, do not do as you please,” Muzammil said.

There are several levels of Ahlul Qur’an, recitation Qur’an recit the video viral on the internet. He explained, first, is Qiraatul Qur’an, that is just reading the verses of the Qur’an. Second, Tilawatul Qur’an, reward is more important in the sight of Allah because at this second level not only read, but contemplating the meaning and application. Third, is Tahfidzul Qur’an, which is keeping the Qur’an by memorizing it.

“In memorizing, the huffadz (memorizers of the Qur’an-ed.) Are not just memorizing, but they are also keeping, repeating, and istiqomah in remembering,” explained Muzammil.

He added that those who keep the Qur’an will give the crown of heaven to his father and mother, and will lead his family to heaven.

This is the time, said the future architect, as the young generation of Islam to love the Qur’an and make it a source of spirit in doing all activities that are beneficial to the surrounding environment.

Meanwhile, the chairman of Closing Syahid Fair, Muhammad Rasuli, is very grateful for the success of the event with many enthusiastic seminar participants with Qur’ani talk show.

He hopes this event can be useful and awaken the Muslims how important the Qur’an in life.

“Because in this millennial era, there is a lot of moral degradation, especially those affecting youth. The solution of the problem is back to the Qur’an and al-Sunah,” Rasuli said in his speech.

Known, the event that was opened by Warek III Prof. Dr. Yusron Razak MA was concluded with Maghrib prayers. (usa)