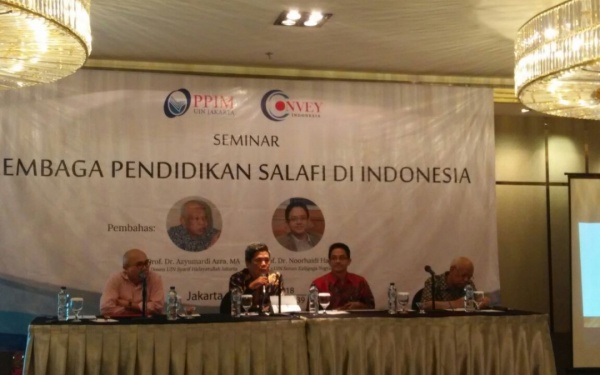 Jakarta, UIN News Online – The development of Salafi-style Islamic educational institutions in Indonesia has continued to increase since the last 20 years. The government through the Ministry of Religious Affairs is encouraged to embrace the Islamic educational institutions that strictly hold the principles of monotheism and doctrine al-wala ‘wa al-barra’ so as not to cause conflicts and tensions in the society.

Salafi Pesantren Research by the Center for Islamic Studies and Society (PPIM) UIN Jakarta during 15 August to 15 October 2017 noted, the number of Salafi educational institutions continues to grow. Of the 25 districts and cities in 13 provinces surveyed, a total of 111 Salafi educational institutions grew. Details, 95 boarding schools, 11 primary schools, 3 colleges, and 2 courses institute.

“It is believed that the actual number was much higher, this is due to the number of areas that have not been studied. This shows that the development of Pesantren and Salafi educational institutions is considered quite rapid, “said Din Wahid Ph.D., one of the researcher from PPIM UIN Jakarta, during his research result presentation in Jakarta, Monday (01/29/2018).

At first glance, the author of doctoral dissertation Nurturing Salafi Manhaj: A Study on Salafi Pesantrens in Contemporary Indonesia at Utrecht University added, there is nothing wrong with the development of Salafi-style educational institutions in Indonesia. However, its development often creates controversy or conflict with the surrounding community, this is evidenced by several cases that occurred, such as the burning of red-white banners in a pesantren and community rejection over the construction of a mosque in Bogor, West Java. Other cases also occur in several other cities such as Batam and Surakarta.

Din suspects that there are a number of reasons for friction between the people and Salafi educational institutions. According to him, the dominant factor is the strict implementation of Salafi manhaj, especially in the principle of Tawheed that makes the mission of this group often intersect with traditional Muslim groups. Another thing is the embodiment of al-Wara wa al-Barra’s doctrine that encourages this group to live exclusively.

Based on the results obtained, research encourages the government through the Ministry of Religious Affairs to embrace the pesantren and other Salafi educational institutions so they will feel getting attention from the government. “The government is also expected to provide proper guidance for them,” he said. (usa)