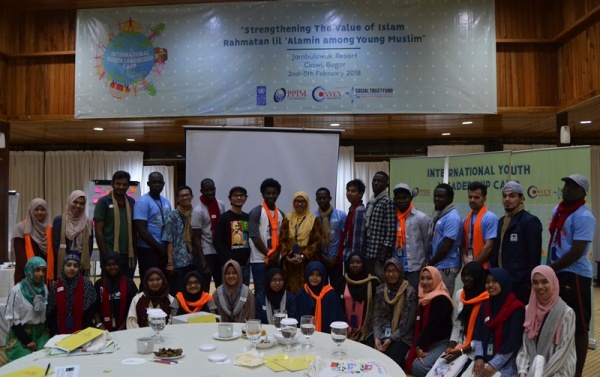 Program Coordinator Muhammad Zuhdi Ph.D to NEWS UIN Online, Sunday (2/4/2018), said the cooperation activities of STF UIN Jakarta with PPIM UIN Jakarta and UNDP was attended by 29 students of various Islamic public and religious colleges. In addition to 10 Indonesian students, 19 other participants are students from various countries who study at UIN Jakarta and several other national universities.

In this activity, continued the Deputy Director of STF UIN Jakarta, the participants were involved in discussions about peace, Islam Indonesia, and how the role of Indonesian Muslims to promote peace with a number of expert sources. Others, they discussed the form and tendency of violence and narrow radicalism that encourage humanitarian conflict.

“With this activity, we hope that participants representing young Musliam get new experiences, an understanding of what is called moderate Islam, and how they deal with the problem of narrow radicalism,” he explained.

Understanding Islam rahmatan lil alamin, he explained, can not be separated from their responsibility in presenting Islam as a friendly belief and full of respect for the diversity.

” Later, they are expected to become agents that can spread peace,” he continued.

Based on UIN NEWS Online observation, the activities of the International Youth Leadership Camp are filled with discussion presentations and visits to non-Islamic religious houses. Some discussion speakers include the Head of Master Program of SPIN UIN Jakarta Dr. JM Muslimin MA, Founder of Peace Generation Irfan Amalee MA, Lecturer of Faculty of Adab and Humanities UIN Jakarta Dr. Yeni Ratna Yuningsih, and Director of the International Center for Islam and Pluralism Syafiq Hasyim.

In his discussion, Irfan presented the theme of Radicalism as a threat to the Peace of humanity. JM Muslimin is presenting a discussion on the Differences of Islam and the Identification of Radicalism. As for Yeni and Syafiq, each presents the Reinforcement of the Values ​​of Rahmatan lil ‘Alamin and the Role of Youth in Promoting Peace.

While visiting the worship house is done by visiting Buddhist temples, Buddhist Temple Dharma & 8 Pho Sat, in Tonjong area, Bogor. In addition to introducing the form and function of the monastery, the participants discussed with Buddhists living in peace within the local Muslim majority.

Pa Modou Faal, one of the participants from Gambia, West Africa, claimed to have a lot of insight about understanding the concept of Islam rahmatan lil alamin, conflict resolution, to the uniqueness of the Indonesian Islamic model. In contrast to the Gambia, he said, the religious identity of diverse Indonesians is quite freely displayed in the public domain.