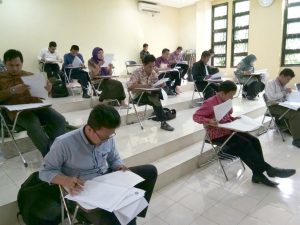 Staff of Academic Administration of SPs UIN Jakarta, Adam Hesa, told UIN NEWS Online at SPs building UIN Jakarta, Wednesday (12/7/2017), said the participants who participated in the selection of SPs UIN Jakarta is the result of file screening which conducted during the registration period at the Ministry of Religious Affairs. Those who pass the file screening, then follow the selection of written exams and interviews spread across several UIN campuses in Indonesia.

â€œThere are 92 Participants who register or choose SPs UIN Jakarta. From that number, most of them are selected in UIN Jakarta SPs, while some are in other UIN campus,” he said.

Based on data from the Ministry of Religious Affairs website, there are at least 996 participants who passed the file selection at the admission of new students through the 5000 doctoral program of Ministry of Religious scholarship in academic year 2017/2018. They then participated in selection of several UIN campuses in Indonesia, including UIN Jakarta, UIN Aceh, UIN Makassar, UIN Malang, UIN Padang, and UIN Surabaya.

Implementation of the screening at SPs UIN Jakarta took place in a number of locations. The event starts at 08.00 to 13.00 with Academic Potential Test, Arabic and English, as well as dissertation proposal interviews as tested material. Participants who participated in the screening are generally a lecturer from various universities in Indonesia, both public and private.

5000 Doctoral Program is the flagship program of Directorate of Islamic Higher Education, Directorate General of Islamic Education, Ministry of Religious Affairs. The program was first launched by the President of Indonesia, Joko Widodo in December 2014. The 5000 Doctoral Program includes the provision of S3 study assistance for educators and education personnel who continue to study on campus in the country and abroad. (usa)