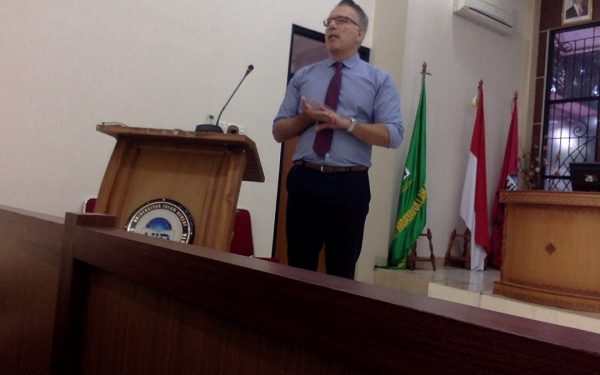 SPs, UIN News Online – To overcome the Kurdish crisis, there are 10 main foundations to reach a peaceful point in dealing with and resolving conflicts in the Kurdish region of Turkey.

The thought was said by Prof. Dr. Alpaslan Ozerdem of Coventry University, UK in his public lecture titled “10 Golden Rules of Peace building: Kurdish Crisis in Turkey”, at the auditorium of Graduate School of UIN Syarif Hidayatullah, Jakarta, Tuesday, 24 October 2017.

Besides a public lecture, his presence was also as followed up Memorandum of Understanding (MoU) between Graduate School (SPS) and Coventry University.

The 10 foundations which had been reached at the meeting point of Kurdish peace in Turkey, he continued, the format approach and foundation was consider irrelevant for all conflict situations. There always be appear a new format in accordance to the dynamics of the conflict itself.

“But, it is a certain that no peaceful effort will succeed without initiation and leads to the realization of justice for all involved parties,” said author of the book Peace in Turkey 2023.

The 10 foundations presented by Ozerdem; first, Peace made by people. That peace is not only made by the elite, yet it must depart from the consciousness of the community itself. Second, Stages of completion in layer; conflict management, conflict resolution and conflict transformation.

He further added the 10 foundations of peace by stressing out six points of the main foundations of peace. Fourth, social justice, that peace is base on and lead to social justice; fifth. Beware of regional or international dynamics. In pursuing peace, it is a necessity to always observe the regional and international social dynamics; sixth, transform war economy to peace economy which means turn the war economic model into a peaceful economic model; seventh Do not romanticize and dramatize the peace.

“The eighth is also important, the need for psychological reconstruction as a priority. Reconstruction and psychological rehabilitation should be the major concern. The ninth factor, understand well enough the traditional peace building approach, by understanding well the peace-based approach to traditional values, becomes urgent, “he said in front of UIN Jakarta graduate students.

Meanwhile, Director of Graduate School, UIN Jakarta, Prof. Dr. Masykuri Abdillah, stressed out that a peace effort in justice will always result in the principle of togetherness.

“Because everyone feels victorious and no one feels defeated, so it is a win-win solution. This is reflected also in his experiences of handling conflict in some areas in Indonesia, “said Masykuri. (usa)