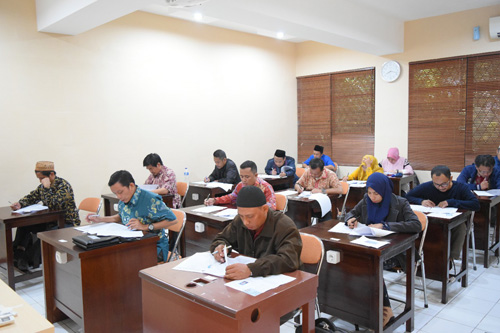 SPs, UIN News Online – Graduate School of UIN Jakarta (SPs) selected at least 69 prospective scholarship recipients of  the 5,000 Doctorate Program from the Ministry of Religious Affairs for 2018 fiscal year for Islamic Studies course. The selection was held on campus of SPs UIN Jakarta on 28-29 June 2018 starting at 08.00 WIB until 11.30 WIB (written test) and at 08.00 WIB until finish (oral test).

First day of selection (written test) was held on Thursday (06/28/2018) with materials Academic Potential Test (TPA), Arabic, and English. While the second day (oral test), Friday (06/29/2018), the test material in the form of interview dissertation proposal.

“There are 1,358 national selection participants. They come from various universities and other institutions, both public and private,” said Asriati in her office on Thursday (06/28/2018).

“Based on the data, there are at least 78 participants from all over Indonesia who chose SPs UIN Jakarta as their study destination. They are selected in UIN Jakarta SPs also in some other PTKIN in Indonesia,” she explained.

She also added that participants from UIN Jakarta, such as lecturers, are not allowed to take a study at the college where they are on duty. The same provision also applies to participants in other universities.

“So, if they passed the selection test, the participant must take cross-study. The graduation of the selection results will be announced online on July 28, 2018,” she said. (usa)