Selection for Undergraduate student candidates to the Middle East 2019

Rectorate, UIN News Online – To follow up the MoU between the Indonesia’s government (through the Ministry of Religious Affairs) and several mid eastern countries (Egypt, Royal Kingdom of Morocco, Royal Kingdom of Lebanon, and Republic of Sudan), Center for Language Development (PPB) of UIN Jakarta in collaboration with UIN Surabaya carry out the new student candidates selection test to study in Egypt, Sudan and Morocco.

Azkiyah, the person in charge for UIN Jakarta to UIN News Online, Thursday (06/13/2019) said this selection aims to filter the Islamic Senior High Schools, Islamic Boarding Schools and other equivalents graduates who have strong abilities and interests to continue their studies abroad, as well as to determine the participants who will continue their studies in Egypt, Sudan and Morocco.

“The participants are required to bring test equipment, such as Laptops that have Google Chrome installed, Arabic Keyboard, and active Webcam Headset,” said Azkiya.

She also added that the selection process is divided into two phases; the first is online Arabic language skills test by using the e-test application. “The second phases are Arabic conversation test and memorizing at least two juz of the Qur’an,” she added. 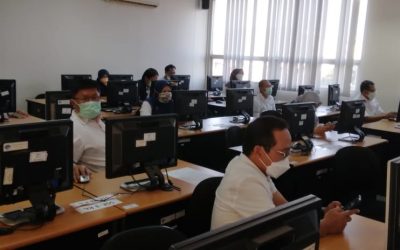