Rudiantara inaugurates the opening of AICIS 2019 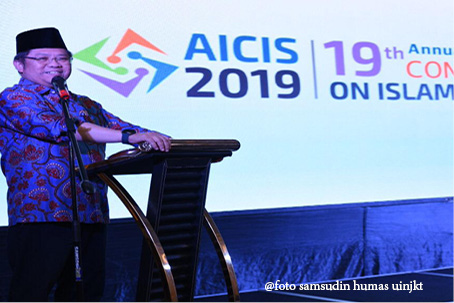 Jakarta, UIN News Online – An era of disruption must be anticipated by all Islamic education stakeholders.

This was said by Communications and Information Minister Rudiantara during the Annual International Conference On Islamic Stuides (AICIS) 2019 opening ceremony, Tuesday (10/01/2019) held at Mercure Hotel, Jakarta.

According to Rudiantara, Islamic education must be able to adapt to various changes. “The current generation must be encouraged to be more creative and think critically” he said.

In addition, the Islamic education ecosystem also has a strategic role to put a halt to the hoaxes that often emerge in cyberspace today. Millions of students in the Islamic education institutions who understand the religion of Islam can apply the practice of living with ‘muamalah medsosiyah’.

“The large number of Islamic educational institutions in Indonesia has the potential to take on this role,” said Rudiantara.

Meanwhile, Director General of Islamic Education (Pendis), Indonesian Ministry of Religious Affairs Kamaruddin Amin said that the 2019 AICIS was a medium for Islamic scholars and academics to contribute to solving various world problems.

According to Kamaruddin Amin, there are nearly one thousand Islamic higher institutions, 72 thousand elementary and secondary education, 30 thousand pesantrens, and seven million takmiliyah madrasas. From that institution there are 10 million students, four million santris, one million teachers, 32 thousand lecturers, 500 professors and 6000 doctors.

“If the large resources are well managed and directed to contribute positively, the results will be extraordinary,” he said.