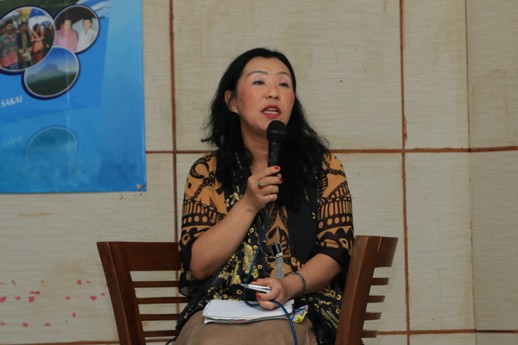 Bintaro, UIN NEWS Online – The Indonesian Muslim community is suspected to be more conservative and intolerant of adherents of different religious beliefs. The less systematic Islamic learning given to the younger generation and the widespread use of social media are considered to be the cause.

This was conveyed by Indonesian Islamic Anthropologist Minako Sakai when speaking at the 2nd International Conference on Culture and Language in South East Asia, Wednesday (08/29/2018). At the conference, Sakai presented a paper entitled The Increasing Role of Non-Orthodox Islamic Education as Mediating Agencies: Social Media and its Challenge for Islamic Higher Education in Indonesia.

“The image of Indonesian Islam has changed. It showed a more conservative and intolerant development towards other religions, ” she explained.

Sakai who examined the role of orthodox Islamic authority and its influence on Islamic social ties for more than 25 years saw a shocking picture of two conflicting things. On the one hand, Indonesia’s economic development, which was quite successful, encouraged the birth of a middle-class socio-economic group.

Besides the economic capabilities, this social group is characterized by their success in accessing better levels of education. That way, they ideally grow as rational and moderate religious followers.

On the other hand, there has been a strengthening of conservative tendencies among Muslim communities. “So there is a surprising picture that there is a conservative Muslim revival while at the same time economic development is also quite successful,” she explained.

The development of this tendency, Sakai suspected was the impact of non-systemic Islamic religious teachings conducted by religious leaders. At the same time, the younger generation is also getting closer to social media,  which is an effective forum for the spread of Islam in a conservative and intolerant tone. (usa)