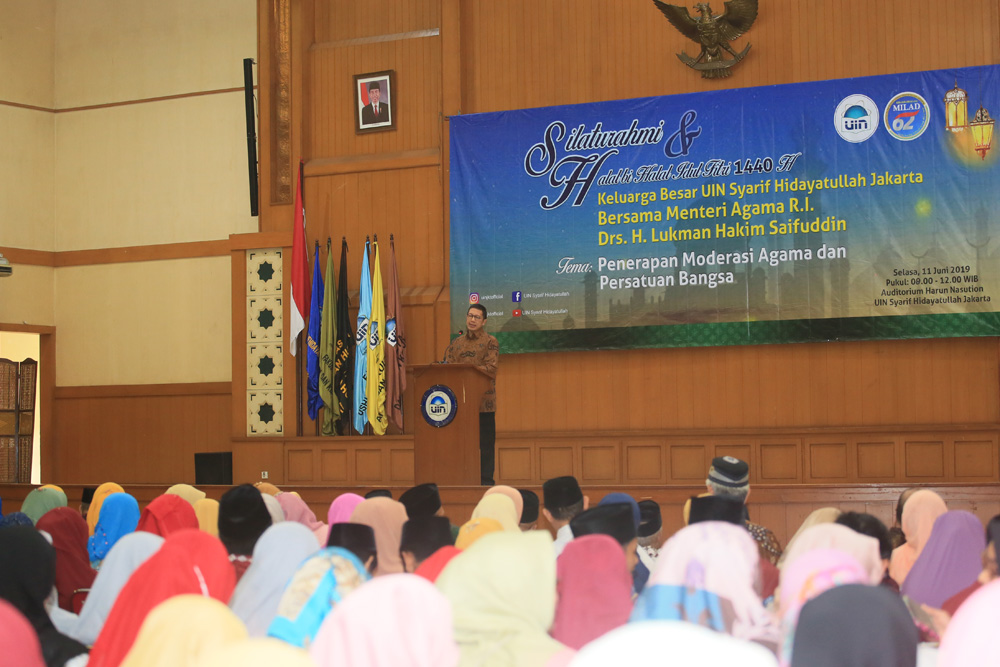 Main Auditorium, UIN News Online – Indonesia’s Minister of Religious Affairs Lukman Hakim Saifuddin invites all academic community of UIN Jakarta to contextualize the religious teachings in accordance with the times. This is due to the textual religious understanding can encourage the emergence of extremities. Furthermore, the ongoing socialization of religious moderation among Muslims must be held continuously.

“Religious moderation is the correct way in understanding the Islamic teachings. Therefore, we have to contextualize the teachings so that we do not get caught up in excessive understanding which can encourage the extremism,” said Lukman during his Halal Bihalal speech, held at the Harun Nasution Auditorium, campus I of UIN Jakarta, Tuesday (06/11/2019).

For example, the two extreme poles are based on the text, namely conservatism in understanding religious teachings. This is natural because the source of reference, both from the Holy Qur’an and Hadith, is in the form of text.

On the contrary, said the Minister of Religion, there is also another extreme pole, which is more based on reason. With that reason, they are free to translate the text so that sometimes it is uprooted from the text itself.

First, PTKIN has competent human resources with many professors and doctors who have the authority and legality to talk about scientific matters. Second, PTKIN has a scientific tradition that is rooted in classical science which is maintained by its “sanad”, namely the existence of scientific connection.

“And the third, tradition of understanding the Indonesian Islam. This tradition has been going on for decades and inherited by scientists, such as Islamic values that are integrated with Indonesian culture. Therefore, Indonesian Muslims become wiser in looking at life issues which are based on Islamic values,” said Lukman. (usa)