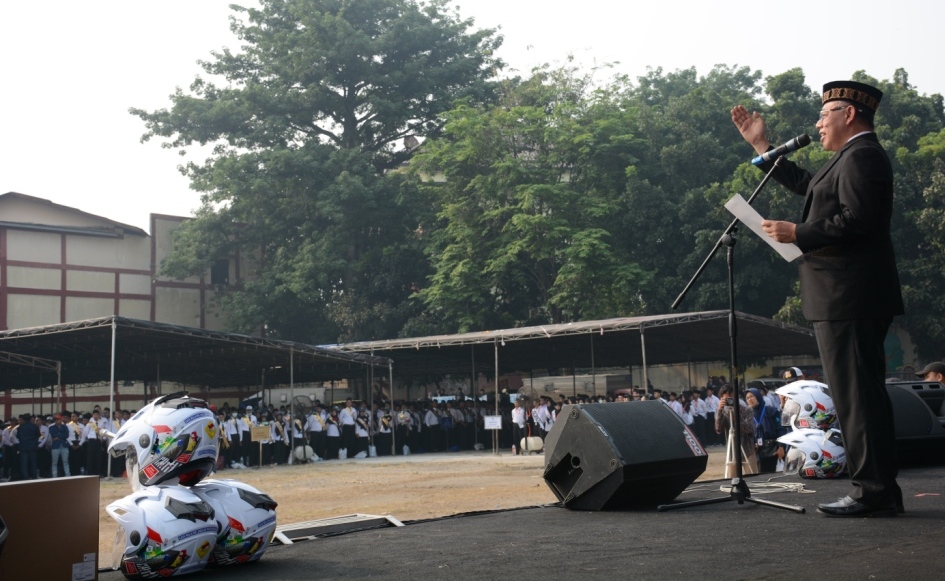 Ciputat,  UIN NEWS   Online–   Today, linearity in tertiary education is not particularly noticed by  the employer.   However, there are so many employers today who sees the skills and ability possessed.Therefore, when you study at UIN Jakarta, you must also continue to develop and hone your skills.

This was conveyed by the Rector of Jakarta UIN Prof. Dr. Dede Rosyada when giving a speech in the opening of PBAK 2018/2019 academic year at the Jakarta UIN field, Monday (08/27/2018). The opening was marked by gong beating ceremony.

On the occasion, the rector also appreciated the students who managed to set aside hundreds of thousands of other prospective students.

“I advised you to make the most of your lecture time and do not linger on campus. Also, use the study period to explore the science of your choice, also developing your skills and ability, “he said.

“UIN Jakarta began to be recognized and sought after by international countries. Because UIN Jakarta is known to the world as a campus that always accepts differences, and appreciates pluralism. So, our campus is highly upholding peace,” explained Dede.

The UIN Jakarta campus, according to Rector, has never dichotomized between scholarship and Islam. In fact, on the UIN campus,   both are always integrated so as to give birth to alumni who are Islamic professionals.

” You will learn Islamic values in your field courses. From there, you will become an Islamic professional,” he said.

Based on UIN News Online observation, there were a lot of enthusiasm from the new students totaling 6,800 people following the course of the PBAK opening ceremony. Also present at the event were the Vice Rectors, Deans, Deputy Deans, and all academic community of UIN Jakarta.

It became more lively, when the Minister of Transportation of the Republic of Indonesia, Ir Budi Karya Sumadi, who gave a speech on the occasion, also gave several prizes to selected new students.

For information, PBAK activities will last for four days, Monday-Thursday (27-30 / 08). After the opening ceremony, the activities will be continued at their respective faculties. (usa-rs)