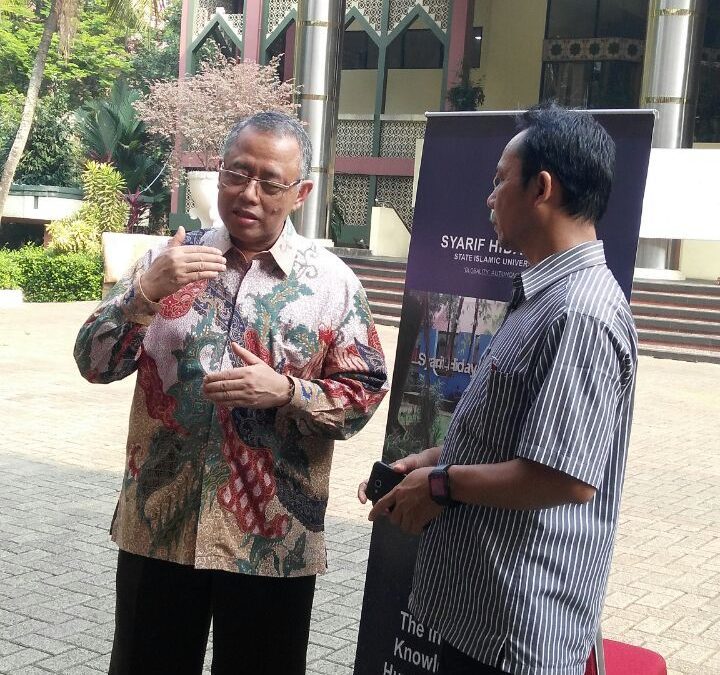 UIN Campus,  NEWS UIN Online   – Rector Dede Rosyada said, UIN Jakarta has long taught the values ​​of democracy and tolerance to its students. This is evident from the strong cohesiveness among campus elements although different cultures, tribes, nations, and even religions.

“UIN Jakarta’s campus is like a miniature of Indonesia where all the differences are here,” he said during an interview with    UIN NEWS Online   after monitoring the implementation of the Independent Exam (UM) in SMPN 3 Tangerang Selatan and SMK / SMA Triguna Utama which was held on Saturday (2/6/2018).

The Rector also confirmed that UIN Jakarta is a state-owned college. Therefore, the differences between tribes, cultures, classes, and races, including religion, are highly regarded as being part of the Indonesian face.

Also, according to Rector, UIN Jakarta campus is also very multicultural because students come from various regions in Indonesia, including foreign students from abroad. Even in UIN Jakarta campus now there are some non-Muslim students. They want to learn about Islam.

“So, UIN Jakarta campus is very teaches the values ​​of tolerance and mutual respect for differences. Insha Allah they (students, Red) will be good children in the future, “he said.

He hopes that prospective new students who are currently being selected, after becoming part of the big family of UIN Jakarta, later also can be a student who really appreciate the difference.

“The cultivation of democratic values ​​and tolerance has long been taught. Even those values ​​have been offered and integrated into the education curriculum at UIN Jakarta,” he said. (usa)