Rector: The Construction of LPTK Building in Sawangan Will be Continued 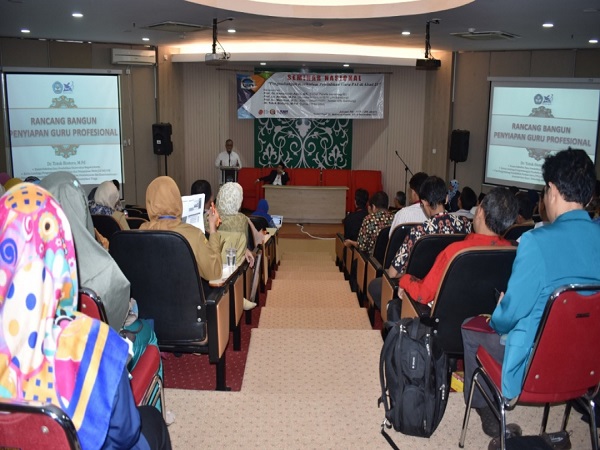 FITK Building, UIN NEWS Online– Based on a letter issued by the Ministry of Religious Affairs of the Directorate General of Islamic Education No 4736 / DJ.I / Dt.I.IV / Dt.I.IV.5 / KP.02.2 / 09/2017 dated 27 September 2017, it was stipulated that the Institute of Educators and Labor The education (LPTK) of certification organizers appointed this year is only one, namely Faculty of Science Tarbiyah and Teacher Training (FITK) UIN Jakarta.

To accommodate it, the Rector of UIN Jakarta Prof Dr Dede Rosyada MA has prepared the building in Sawangan Depok number for the place of the activity from 2015.

The reason, Dede continued, FITK filed a request to the government to build a nine-story building, but due to lack of budget for education buildings, the government only agreed to four floors.

“Currently, the government budget is prioritized to build infrastructure, roads and dams, not focus on school buildings,” Dede added in front of the Head of PTAI PAI Prodi who participated in the seminar.

Therefore, at the end of his leadership as Rector of UIN Jakarta, he decided to continue the mangkrak building using Non-Tax State Revenues (PNPB).

“I think PNPB funds are enough to finish it and hopefully it can be used. Insha Allah we will have a building LPTK, “said Dede welcomed applause seminar participants.

Known Building LPTK UIN Jakarta began construction on Friday (07/08/2015) on an area of ​​2.7 hectares. The location of the building is on the path of Bojongsari-Sawangan Road and into the Bojongsari New Village, Bojongsari District, Depok, West Java.

The LPTK facility is built with details of one main building, auditorium, mosque, guesthouse, parking area and park.

At that time, representing the rector, Murodi said the existence of LPTK is needed as the central location of education, training, and certification of teachers who have been managed by UIN Jakarta. Currently, similar activities are mostly done in UIN Jakarta campus environment by borrowing FITK building, thus less than the maximum of its operational. (usa-rs)