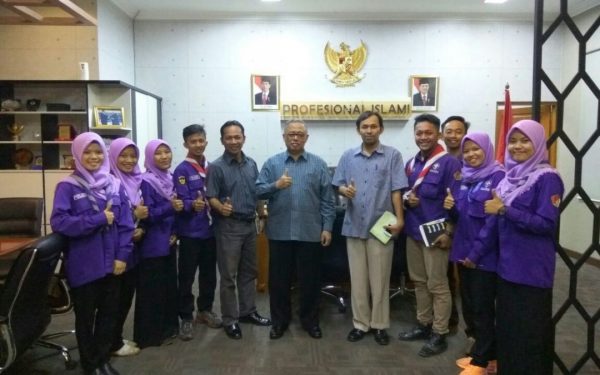 Rectorate Building, UIN NEWS Online – UIN Rector Prof. Dr. Dede Rosyada said, one of the successes of students in making events or activities lied in the process at the beginning. Generally, the process was done with great effort and careful preparation. If preparation was done successfully then the expected results would be obtained.

“If the initial process is good and successful undoubtedly it will be good also in the activities” said Rector when receiving UIN Jakarta Scout Movement masters and members in Rector Room, Rectorate Building, Wednesday (18/10/2017). UIN Jakarta Scouts were facing the Rector to report on their plans in organizing the International Conference entitled “The Prevention of Radicalism and Terrorism” and the bhakti environment of the scout of the state Islamic religious college (PTKIN) in Indonesia which will be held on UIN Jakarta campus and Pulau Pari, the district of Kepulauan seribu, on October 26-28 2017.

Rector pointed out that student activity including Scout activities would be successful when it has careful preparation and well planned. Therefore, the achievement of activities can be measured from the initial process, such as budget planning, materials, resources and the supporting facilities readiness.

“Therefore, the activity plan must be well prepared from the beginning in order to obtain optimal results,” he said.

The Rector himself supported and welcomed these positive activities initiated by UIN Jakarta Scouts. Even the Rector was scheduled to be ready steady to attend the event to give speeches as keynote speakers.

As reported previously, in order to commemorate the 28th Anniversary (HUT), Scout Movement Group 07.075-07.076 South Jakarta base UIN Jakarta will hold a series of activities. Among other will be International Conference on October 26, 2017 at Syahida Inn, Focus Group Discussion (FGD) Rover/Ranger-senior Rover/Ranger Scout PTKIN in Indonesia in Diorama Room on October 26, 2017, and Bhakti Environment (Social Youth Expedition) in pulau Pramuka and pulau Pari, kepulauan seribu district, DKI Jakarta Province, on 27-28 October 2017. The peak event of the 28th UIN Jakarta Scout Movement will be held at Syahida Inn on October 26, 2017. (usa)