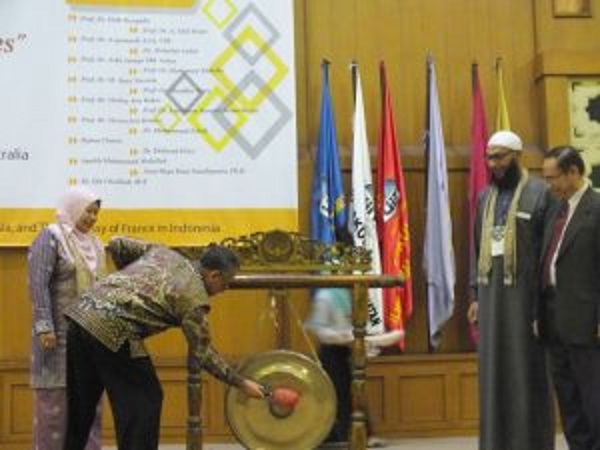 It was marked by the beating of the gong by the rector accompanied by the Dean of the Faculty of Tarbiyah and Teacher Training (FITK) who became chairman of the ICEMS committee Prof Dr A Thib Raya, witnessed by the Head of Center for Thought and Islamic Education (CITE) University of South Australia Prof Mohamad Abdalla, Professor of Universiti Putra Malaysia (UPM) Prof. Dr. Aida Suraya Md Yunus and a number of speakers nationally and internationally and hundreds of conference participants.

Dede said in his speech, the issue raised in the theme was “Education in the 21st Century: Knowledge, Professionalism, and Value”, according to him, it has been the relevant issue to be discussed lately.

The reason he explained, with the rapid advancement in technology today impact on the greater challenges and constraints in education world which they need to be able to make not only knowledgeable and professional educator candidates but also well behaved one.

“Technological sophistication should be utilized as a practical medium in the development of potential educator candidates in order to make them to have good quality output and well preserve and resilient personal which make them proficient to deal with complex society,” Dede said.

From this conference, He hoped there were research findings and formulations of thinking related to education in Muslim society.

In addition, the Professor of FITK Education Management added that the conference held by FITK made FITK 60th anniversary become more energetic.

“In its 60th anniversary, FITK is able and successful in organizing this important event, especially knowing that this event is also supported by several partner institutions,” added Dede who is also Chairman of the Forum of State Islamic Religious College (PTKIN).

He added that UIN Jakarta highly appreciates the involvement of Faculty of Education UPM Malaysia and the Center for Thought and Islamic Education of the University of South Australia.

“I am also grateful to the Canadian Embassy and the French Embassy. I hope this partnership will continue to grow in the coming years, “he said.
With this partnership, he hoped not only to make UIN Jakarta more widely heard and seen, but also more importantly to increase its contribution to knowledge and society around the world.
“Of course there are many things that need to be done to make this university more productive and contributive, but what we have seen now is an example of how our academics are giving their best effort to improve the achievement of this university,” he said.

He believed from this conference the participants will get a good benefit from the scientists of several countries related to education, so that it can impact on the development of education in Muslim communities and societies with different beliefs. (usa-im)