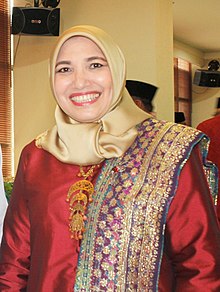 This was said by the Rector of UIN Jakarta Amany Lubis at Harun Nasution Auditorium, Campus I of UIN Jakarta. According to Amany, the experience she gained during her academic visits to various countries confirmed that the harmony of religious life in Indonesia is still far better than other countries.

“This relationship between religious communities in Indonesia is the best example in the world, and has been recognized by the United Nations and can be used as a role model for other countries,” she said.

This can be seen from the protection of minority rights even though the majority of Indonesians are one of the largest Muslim populations in the world. Both Muslim and non-Muslim communities live in mutual respect and supporting each other. They can also carry out their respective religious obligations properly.

She also added, as one of the PTKIN in Indonesia, UIN Jakarta is an inclusive Islamic state university. UIN Jakarta also applies an inclusive attitude by accepting students from various religious backgrounds to study in this campus.

The Rector also admitted that the harmonious life of the religious community in Indonesia itself did not always go smoothly. A number of acts of terrorism in the name of religion often appear in the midst of the lives of religious communities.  “But it should be noted that religion is not the only cause, it also driven by social-economic inequality, and political situations that encourage certain social groups to rise up in the intolerance movement,” she explained.

Meanwhile, Ushuluddin faculty lecturer, Media Zainul Bakhri acknowledged that religious harmony in Indonesia is a good capital in encouraging religious moderation in the country. Generally, he said, In general, he said, relations between religious communities in Indonesia is running as it should. “Religious followers in Indonesia can live peacefully and side by side,” said Media. (usa)