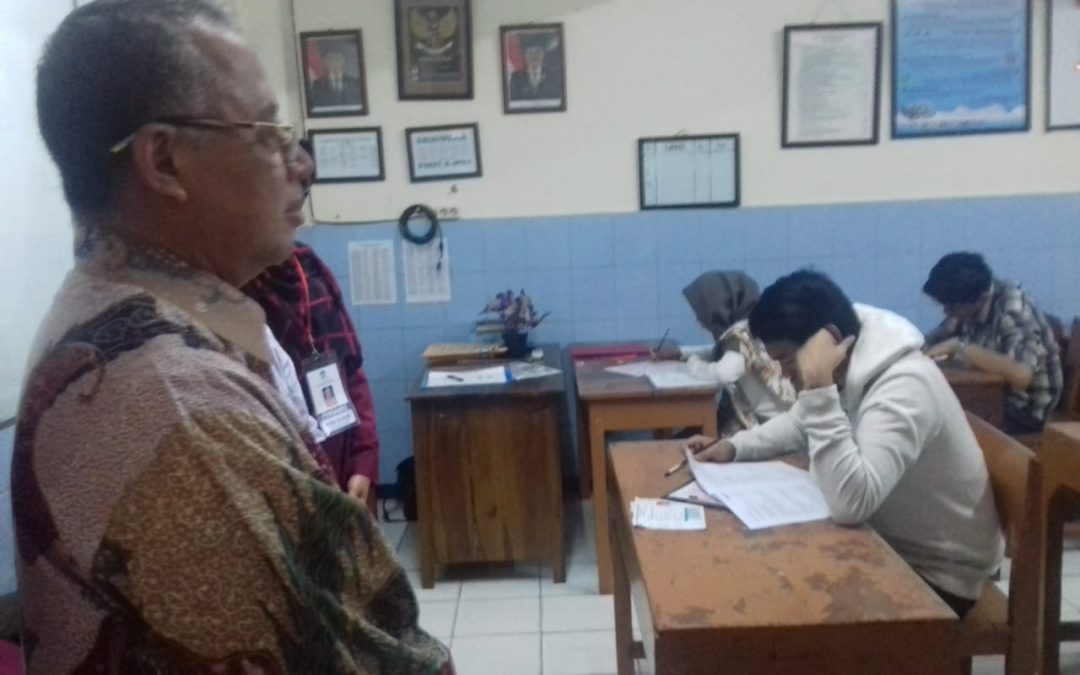 UIN Campus, UIN NEWS Online   – Rector of UIN Jakarta Dede Rosyada accompanied by Chief Executor of Independent Examination Zaenal Arifin conduct a review to a number of location of Independent Exam (UM) in campus area 1 which was held on Saturday (2/6/2018). The review starts at around 09.00 am to the building of SMPN 3 South Tangerang which is on the right side of campus, then towards Triguna Utama High School in the same location.

The visit of the Rector who was also accompanied by Vice Rector for General Administration Abdul Hamid, Vice Rector for Murodi Cooperation, and Head of Subarja Planning and Finance Division to SMPN 3 only lasted several minutes. The Rector looked closely and entered the exam room.

Similarly in SMA Triguna Utama, the Rector had entered the classroom and had a brief dialogue with the supervisor. Rector did not comment much considering the classroom atmosphere in the middle of the exam so it is feared will disrupt the concentration of participants.

After visiting the test location at SMA Triguna Utama, the Rector then returned to his office in the Rectorate building.

During his visit, Rector greatly appreciated the high interest in choosing UIN Jakarta as one of the top Islamic religious universities (PTKIN). He admitted the enthusiasts to UIN Jakarta is quite high. However, given the intense competition and limited classrooms, certainly not all can be accepted in UIN Jakarta.

“Yes certainly there are some who must be marginalized. We apologize to the community, especially the parents of prospective students, “he said.

Rector said that the high public interest in UIN Jakarta indicates that UIN Jakarta campus is very good for their children’s education. UIN Jakarta Campus is also very comfortable and friendly. Students can get education in addition to affordable costs, also filled with a sense of kinship.

As reported previously, UIN Jakarta held a UM for prospective new students’ academic year 2018/2019. Selection was held on Saturday (06/02/2018) at a number of location points with the number of participants as much as more than 17,000 people. (usa)