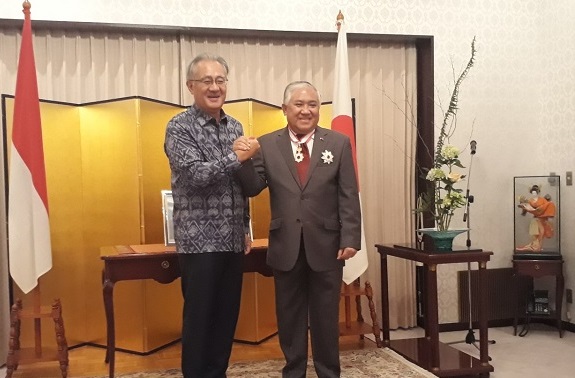 In his speech, Masafumi said the award was given for Din Syamsudin’s contribution in encouraging tolerance as well as understanding between Islamic communities in Indonesia and Japanese society.

“We are very proud to give this award to Din Syamsuddin who worked in encouraging the mutual understanding between Japan and Indonesia,” said Masafumi.

He also added that the Kyokujitsu-shō Award was held on November 6, 2018. After attending the award ceremony, Din held an audience with Japanese Emperor Akihito at the Imperial Palace of Japan.

According to Masafumi, Din as one of Indonesia’s Islamic leaders has also taken part in a number of interfaith cooperation dialogues. One of them is the implementation of the World Peace Forum (WPF).

Din also played an active role in encouraging the invitation program for the Pesantren’s teacher to continue their study in Japan. He also contributes in the Halal food ratification program in Japan. This program has been held by the Japanese government since 2004.

For information, this award was the second award for Din Syamsuddin after previously received the Japanese Foreign Minister’s Commendation award in September 2016. From 2017 to 2018, the Indonesian government trusted Din to assume the position of Special Envoy for Dialogue and Cooperation between Religion and Civilization.

Meanwhile, Rector of UIN Jakarta Amany Lubis gives her appreciation for the award earned by Din Syamsuddin. She hopes that the entire academic community of UIN Jakarta will be motivated to give positive contribution on both national and international scale in accordance with their respective expertise. (usa)