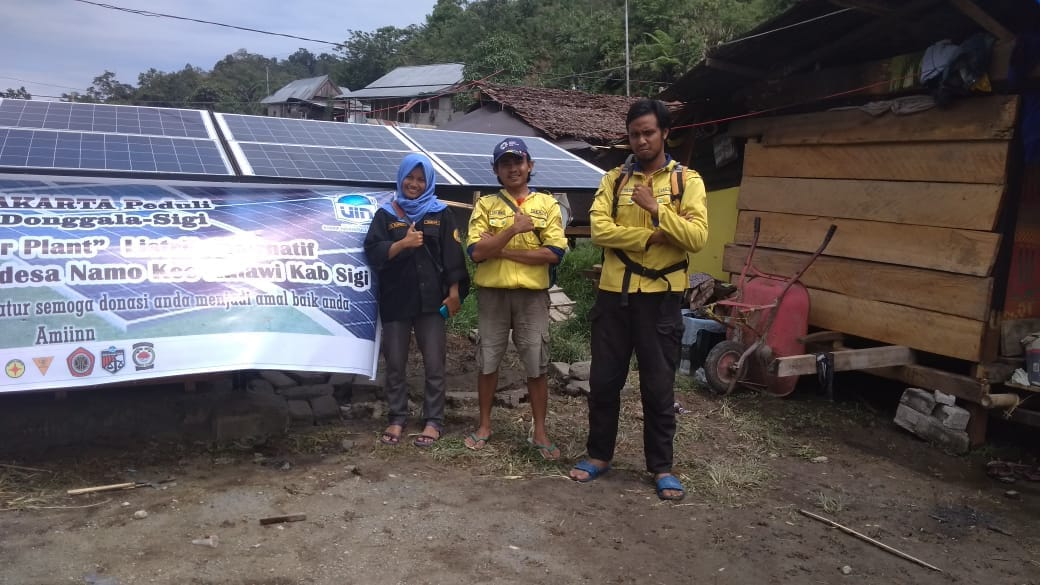 SC, UIN NEWS Online – The earthquake and tsunami that occurred in Central Sulawesi some time ago has attracted empathy and sympathy from students who are members of the Student Activity Unit of Ibn Batutah Human Environment and Humanitarian Lovers Student Group (Ranita) UIN Jakarta. To realize that sense of empathy, they not only raised funds on campus but also went directly to the disaster site as volunteers.

On October 4, a total of four members of Ranita were dispatched to Palu, Central Sulawesi, as volunteers. The release event was carried out in front of the Rector’s building by Deputy Chancellor for Student Affairs Yusron Razak. The four volunteers were Abdurrahman Heriza (Department Islamic History and Civilization, Faculty of Adab and Humanities), Lien Sururoh (Department of Chemistry, Faculty of Science and Technology), Risma Tri Yurita (Department of Social Welfare, faculty of Da’wah and Communication Sciences), and Iqbal Ramadhan (Faculty of Health Sciences). They are in Central Sulawesi to provide an assistance in areas that are severely affected, such as in the cities of Palu, Donggala and Sigi.

In his press statement to the UIN Online News in the Student Center building, Monday (11/12/2018), the Chairperson of Ranita Ahmad Wildanul Akhyar said that the first four volunteers were in Sigi, especially in Silae Village, Silae District. They distributed logistical assistance in the form of biscuits, baby food, baby diapers, sanitary napkins, sardines and shredded rice. The same thing was done in other refugee locations, such as in Donggala, West Coast, Bora Village, and Boladangko Village.

“After that, the volunteer team settled in Namo Village, Sigi. This village is very isolated and there is no volunteer there yet, “said the student of the Faculty of Health Science Pharmacy Department.

Wildan said, the departure of four members of Ranita to Central Sulawesi was a mandate. In addition to channeling community assistance, both from individuals and institutions, the four volunteers also felt called to channel their human resources and expertise in handling disasters. “In terms of funding, thank God we have received assistance from various parties. This was done in the form of raising funds on campus and the community for almost a month, “he explained.

Based on the assessment results of the Ranita volunteer team in the field, the urgent need for evacuation of residents in Sigi Regency, especially in Namo Village, includes building bathrooms, washing places, latrines or toilets and lighting equipment. This program then becomes the priority of handling volunteer teams while they are in the location.

Apart from the procurement, the volunteer team also carried out trauma healing on the children of the victims of the disaster in the refugee camps. Even the volunteers also set up emergency schools so that children can continue their studies.

Wildan said, starting from October 4, 2018 the mission of the volunteer team of Ranita was at the disaster site for 38 days which ended on November 11, 2018. “Ranita’s entire team of volunteers and fundraising teams would like to thank all those who have helped, both morally and materially. Hopefully all the assistance given will be rewarded accordingly by Allah SWT,” he said. (usa)