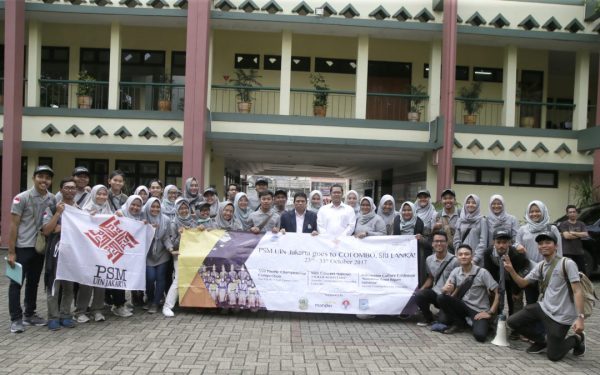 The release ceremony marked the handover of the PSM flag from PSM Chairman Ali Machsun to the Vice Rector. Also present in the ceremony, Sub-division head of Student Talent and Alumni M Trisno Riyadhi MM and PSM senior member.

Yusron Razak in his speech appreciated the efforts made by PSM members in participating in the international competition. He hopes that PSM can achieve the best so as to bring the good name of UIN Jakarta and Indonesia in the eyes of the world through an art-culture show.

“On behalf of the leaders of UIN Jakarta, I deeply appreciate the steps taken by PSM to compete in the international event,” he said.

Yusran also advised that the participants can perform optimally. In addition, the team’s cohesiveness must also be maintained so as to get the expected results.

“I would also like to thank the coaches who have trained and directed the PSM team to perform optimally on the stage,” he added.

The event held by Intercultrural Colombo will take place on 23-30 October 2017. The competition is followed by a number of countries in Asia. There are four delegations from Indonesia whose compete in this event; UIN Jakarta, UIN Surabaya, Universitas Prof Dr Buya Hamka (Uhamka) Jakarta, and Universitas Islam Indonesia (UII) Yogyakarta.

“PSM UIN Jakarta sends 36 personnel. We will collaborate and synergize in the competition,” said the chairman of PSM Ali Machsun to UIN News Online. (usa)