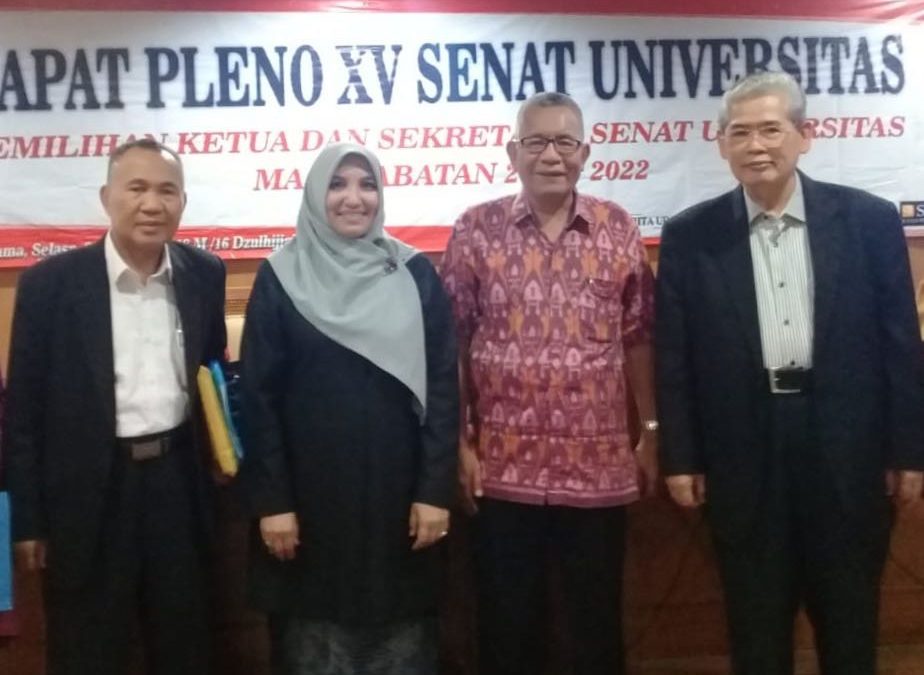 Diorama Room, UIN News Online – Prof. Dr. H. Abuddin Nata MA and Prof. Dr. Hj. Amany Burhanuddin Umar Lubis MA officially leads the Senate of UIN Jakarta, each as Chair and Secretary of the Senate for the next five years. Both were elected at the XV Plenary Meeting in the Diorama Room, Tuesday (08/28/2018), which scheduled the Election of the Chairperson and Secretary of the University Senate for the 2018-2022.

The Plenary Meeting itself was chaired by the 2014-2018 Senate Chair Prof. Dr. HM Atho Mudzhar accompanied by Senate Secretary Prof. Dr. Suwito MA and attended by 56 people from a total of 89 members of the university senate.

In the election of the Senate Chair, Abuddin won the most votes with 40 votes. This Professor of the Faculty of Tarbiyah and Teaching excludes Prof. Dr. Suwito MA and Prof. D. Armai Arief MA who earned 11 and 3 votes respectively. The remaining 1 vote is declared invalid.

As for Amany, he managed to get 35 votes. The Professor of History of Islamic Politics, Faculty of Sharia and Law, set aside the vote acquisition of Prof. Dr. Ulfah Fajarini M.Si and Prof. Dr. Lily Suraya Eka Putri M.Env.Stud 12 and 8 votes respectively.

Responding to the election of the new Chairperson and Secretary of the Senate, Atho and Suwito congratulated and hoped that the senate’s management in the future would be smooth in carrying out its duties. “So that they can participate in advancing UIN Jakarta in the future,” Atho said.

“Referring to the statutes, the senate is in a position to strengthen legislation used by the Rector in carrying out his program to remain in line with the institution’s goals and vision and mission,” he explained.

For this reason, he saw several programs that the senate could do in the next five years. In addition to carrying out the senate function according to the rules, the senate will also continue to socialize the regulations that have been made in the previous period senate.

“During the leadership of Prof. Atho and Prof. Wito, the senate’s performance was very productive. Produces 42 regulations. Of course, we have to help socialize it so that what is on this campus refers to the new rules so that they are in accordance with the rules,” he explained.

In addition, he continued, the senate in the next five years must assist the Chancellor in encouraging the positioning of UIN Jakarta as a leading university. Others, the senate will also encourage the performance of the rector in meeting the expectations of student stakeholders.

Fulfillment of expectations is carried out by improving the quality of learning as well as expanding opportunities for new student participation. “The Senate will also help how the expansion of access expected by the public can be given,” he said.

Meanwhile, Amany added, she also hoped to contribute in supporting the strengthening of the progress of academic institutions, internationalization, and improving the governance of UIN Jakarta. “So that the quality of work and teaching will be in-line with international standards and the reputation of UIN Jakarta can also continue to be improved,” she said.