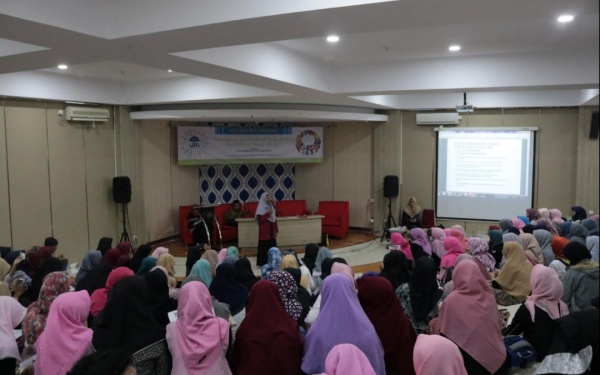 Department Head of PGMI FITK UIN Jakarta Dr Khalimi Masna in his opening remarks said, Indonesia is a country with a very high level of diversity. Diverse in tribe, nation, religion, and race.

“This diversity has both positive and negative sides. From the positive side, diversity is a big capital owned by the Indonesian nation that is not owned by other nations, “said Khalimi in front of dozens of PGMI students who crowded the Prof Dr Zakiah Darajat theater room, 1st floor of FITK’s building.

But from the negative side, he continued, if not managed properly, then this diversity will become a serious threat to the unity of NKRI. Therefore, according to him, there needs to be serious and systematic efforts from the government in maintaining and managing it.

“One of the strategic efforts that must be done is through the implication of multicultural education in schools, including in madrasah ibtidaiyah (MI),” added Khalimi.

On the same occasion, Director of the Institute of Human Development Sri Nurhidayah MSi as one of the speakers said that so far, the concept of Multiculturalism Education assumed some people as part of certain subjects only, so it is not important for other majors / subjects to learn it.

“In fact, multicultural education should ideally be instilled by all teachers in all subjects, both inside and outside the classroom,” she explained.

She emphasized that multiculturalism education should also begin to be invested since children have early childhood education and basic education, so that children become accustomed to living side by side with others who have different backgrounds in harmony, living in equality and equality.

“Parties who must understand and implement multicultural education, among others, principals, teachers, and educational personnel. Therefore, it is appropriate if the Department of PGMI as an institution given the mandate to prepare prospective professional and Islamic teacher candidates to hold events like this” she said.

According to her, this is very useful for students to get an understanding of the concept and implementation of multicultural education at the primary level of MI and elementary school and for Prodi PGMI itself can facilitate the achievement of Multicultural Education at the level of primary education MI / SD. (usa-rs)