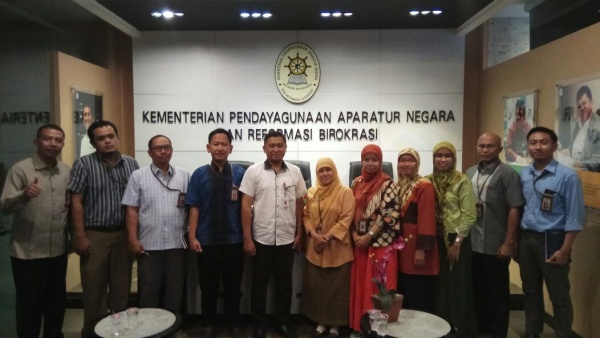 This was conveyed by Sub-division head of ORTALA UIN Jakarta Yunas Konefi SH MSi to UIN News Online in her office, Thursday, (2/15/2018).

According to Yunas, this comparative study is motivated by the willingness of OKP UIN Jakarta to dig up information about bureaucratic governance reform as well as to improve the understanding about job position name, job position standards, competency standards, and various other personnel problems.

In his presentation, Didit said that Kemenpan RB is currently working to finalize the various draft of Government Regulation (PP) as a derivative Law Number 5, Year 2014 on State Apparatus (ASN). This is done to provide legal certainty about various important matters such as ASN management, contract workers (PPPK), performance appraisal, salary, and so forth.

“Of the 19 drafts that are planned, only 6 drafts that have been completed. Meanwhile, related to ASN position, it is expected that all ASN in the future can have specific position in accordance with their specific expertise in order to work both professionally and measurably,” explained Didit.

This comparative study is very beneficial for UIN Jakarta, because there is a lot of information that can be obtained, especially in terms of personnel management improvements. (usa)