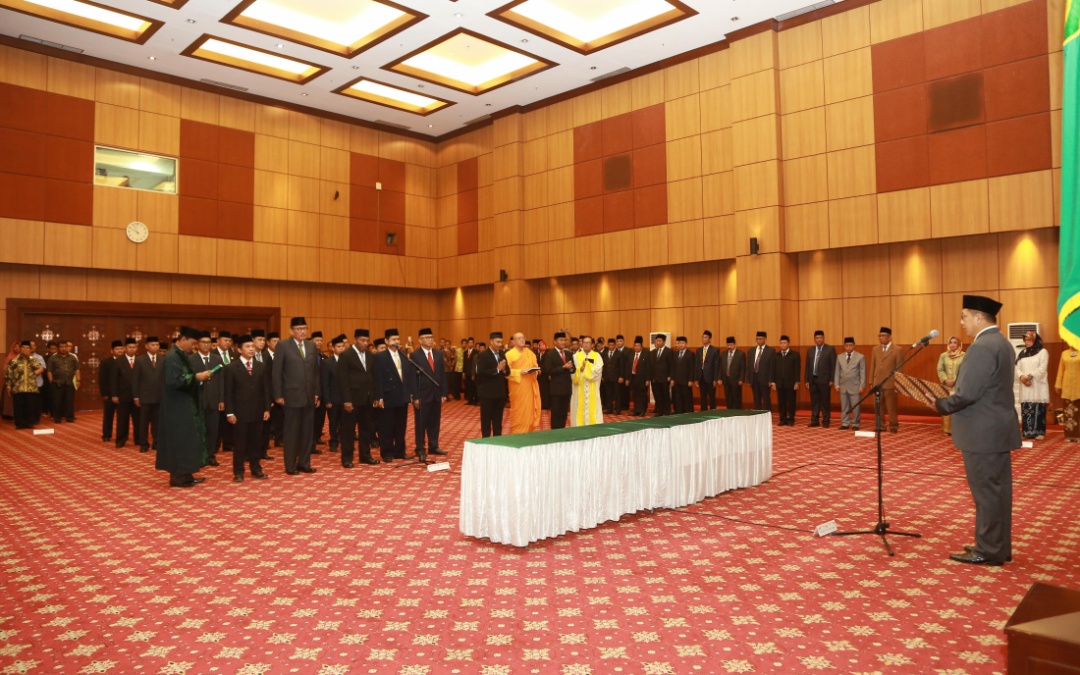 Menag in his speech hopes that the new officials can undergo various programs and activities of Ministry of Religious Affairs RI in order to to serve the life of the ummah. He also advised the officials to put the position of trust from the God and country.

“I am very optimistic that the inaugurated officials today are civilian apparatus who already served for a dozen of years and have a great understanding on bureaucracy. Keep the trust that has been given by this country and God,” said Lukman.

Known, both Arskal and Oman are two lecturers of UIN Jakarta who have a brilliant achievement in their respective scientific career. Arskal is a professor of Islamic Law and Politics, the Faculty of Sharia and Law (FSH). After completing his doctoral program at Melbourne Law School, University of Melbourne, Arskal was awarded a post-doctoral fellowship at the Max Planck Institute for Social Anthropology, Germany (2006-2009). Furthermore, Arskal is believed to be the Assistant Professor at the Aga Khan University’s Institute for the Study of Muslim Civilizations (2009-2012).

In addition to teaching at FSH and Graduate School (SPs) of UIN Jakarta, Arskal writes a number of books and a collection of journals published by national and international accredited publishers. Some of his works are Contemporary Islamic Law in Indonesia: Sharia and Legal Pluralism (Edinburgh University Press, 2015), The Shift in Zakat Practice in Indonesia: From Piety to an Islamic Socio-political-economic System (Silkworm Books, 2008), Challenging the Secular State: The Islamization of Law in Modern Indonesia (University of Hawaii Press, 2008), Shari’a and Politics in Modern Indonesia (ISEAS, 2003).

As for Oman, besides teaching at the Faculty of Adab and Humanities and the Graduate School of UIN Jakarta, he also served as the Chairman of Masyarakat Pernaskahan Nusantara (Manasa) as well as senior researcher at PPIM UIN Jakarta. Previously, he earned his doctorate degree in Philology from the Faculty of Cultural Sciences, University of Indonesia (UI).

Responding to their inauguration, Rector of UIN Jakarta Prof Dr Dede Rosyada MA congratulate them and hopes that they can carry out their respective duties with full responsibility. “May each given fluency in performing tasks that have been entrusted,” he prayed. (usa)