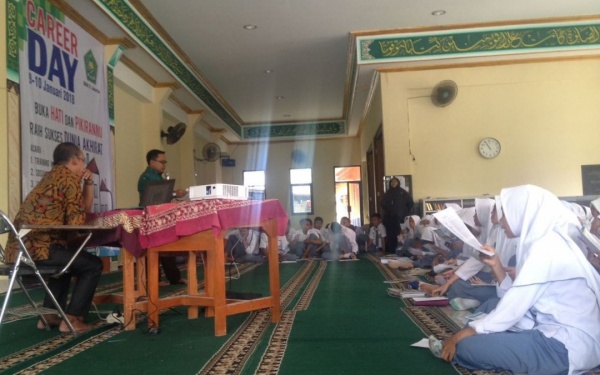 Jakarta, UIN NEWS Online— In order to fulfill the invitation as well as to provide the correct information about the new admissions at MAN 21, UIN Jakarta again held a socialization at Career Day event at the school on Wednesday (01/10), held at Hall MAN 21 Jakarta.

The event, which was held for two days, was attended by at least 150 students of grade 11 and 12. The socialization team came from the Documentation and Publication of UIN Jakarta or Public Relations.

Head of MAN 21 Jakarta Samsurial said the socialization event of UIN Jakarta is expected to provide information to the students to recognize and understand the procedure of admission of new students and the pathways into the college.

With that information, students can choose and decide which majors will be desirable according to the ability or background of each student.

Socialization submitted by UIN Jakarta, continued Samsurial, at least can be the initial information for students in choosing and determining the majors and faculty in UIN Jakarta. Moreover, UIN Jakarta, as the name implies, currently no longer merely open religious majors but also has many choices in the general field.

“About choosing colleges and majors what is most appropriate, it’s up to each. But at least we can direct so that the students are not minimal information, “he said.

The socialization of UIN Jakarta was conducted by PR staff, Hermanudin, Luthfy R. Fikri, and Fevi. All three are alternately doing presentations in front of the students who look enthusiastic.

The socialization materials include courses and faculties offered, new admissions pathways (local and national), tuition fees and scholarships, dormitories, educational support facilities, and academic life on and off campus. In addition, it is also submitted regarding the registration period and the terms of admission of new students and the number of seat quotas provided.

“Alhamdulillah, the students seem so keen to enter UIN Jakarta. Although the distance is not close from home, but we see them remain enthusiastic because they see the cost of education is relatively cheaper when compared to other state universities, “said Herman.