Islamic Education Must Accommodate the Trends of Millenial Generation 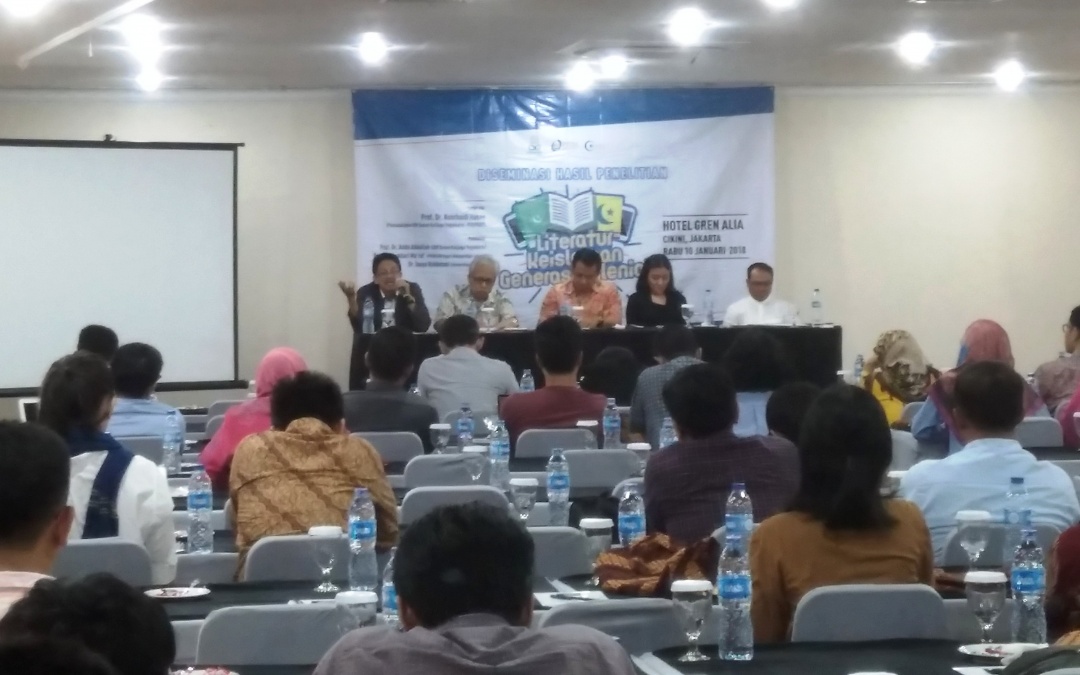 Jakarta, UIN News Online – Islamic education curriculum in school and university must accommodate the trends of millennial generations. At the same time, moderate Islamic literatures must be enriched in so it can fill the needs of Islamic literature readers born in the last 25 years.

The research itself, said Noorhaidi, sees the importance of improving the PAI in both curriculum, materials, and reference books used to accommodate the tendency of millennial reading habits. At the same time, the provision of moderate Islamic literature that can appeal their reading interest is very much needed.

“The government needs to strengthen the moderate-patterned Islamic literature that can be a guideline for the students while studying Islam,” he said.

Millenial generations, he added, prefers popular Islamic literature with crisp language styles and trendy designs. On the contrary, they are less interested in reading the traditional Islamic literature that is hard enough to be understood.

This trend, provides a gap in the spread of ideological Islamic influence through various literary publications with millennial language styles and designs. Though the content contains themes of jihadi, tahriri, tarbawi, salafi, and Islamic populism.

The research itself was conducted in 16 cities in Indonesia, namely Medan, Pekanbaru, Padang, Bogor, Bandung, Solo, Yogyakarta, Surabaya, Jember, Pontianak, Banjarmasin, Makasar, Palu, Mataram, Ambon and Denpasar. As many as 288 individuals were interviewed and 32 focus group discussion (FGDs) were conducted to see the map of Islamic literature for generations born after 1992.

Whereas the Islamic literature referred in the study itself is any form of reading materials that is suspected to have an influence over the knowledge of millennial generations. This could be textbooks, magazines, leaflets and more.

On the other side, research also found a parallel relationship pattern between the growth of Islamic literary production and the development of Islamism movement in a city. Solo, Yogyakarta, Jakarta and Bogor are four productive cities that publish Jihadism books in Indonesia.

Responding to the research findings, Jamhari discloses, there is a contradictory trend that is shown by the millenial generation. This generation shows a lifestyle hybridity such as culinary consumption, fashion style, even music. On this side, they show acceptance of other lifestyles.

But on the religious side, he explained, there was a tendency to maintain a conservative religious attitude. The reading of Islamic religious opinion while ignoring both background and context is the main factor of the said attitude “Well, this is a strange one,” he said.

Meanwhile, Inaya added that millennials have a tendency toward instant, popular, and trendy acceptance of things that are instant, popular, including literacy. To that end, Inaya recommends the necessity of Islamic literature writing with millenial language style and design while maintaining the quality of the content. “It may be necessary to fulfill a ready to use Islamic literature,” she said.

According to Amin, the government should be balancing the study of science and humanities, both are needed in the development of modern technological innovation as well as an appreciation of the values of civilization of human life itself.

“This can be exemplified by giving equal portions between science studies and religious studies. Both are needed,” he said. (usa)