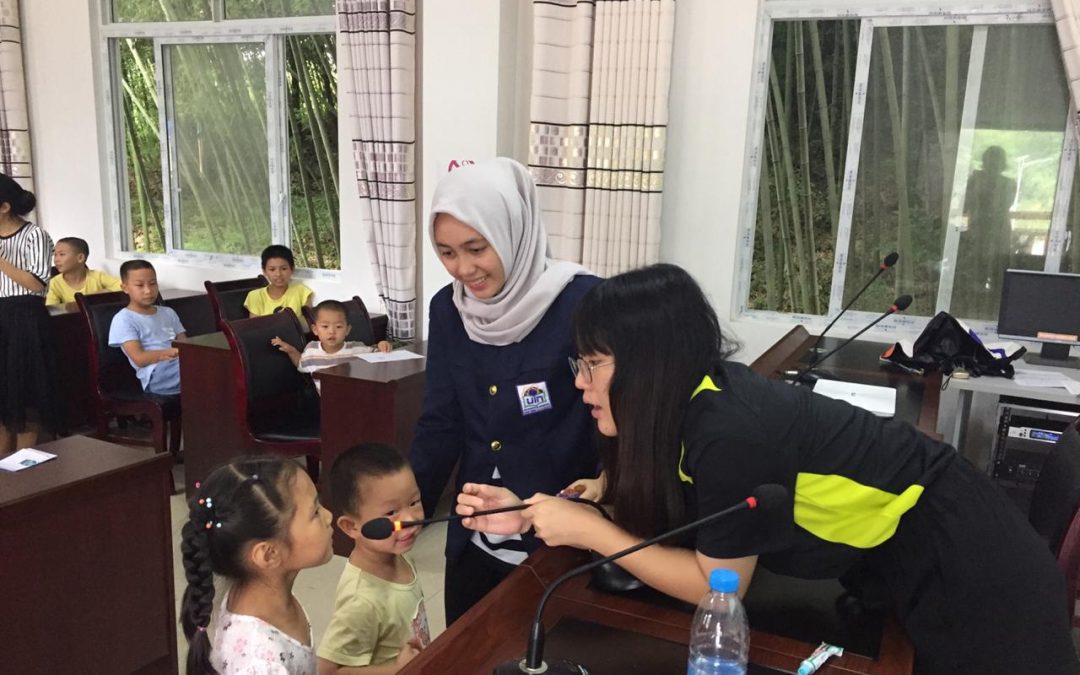 Chongqing, BERITA UIN Online – “Seek knowledge even as far as China.” Such is the word of the Prophet Muhammad (PBUH) that was popular among Muslim communities as narrated by a number of hadith narrators like al-Sakhawi in al-Maqasid al-Hasanah (hn. 125), al-Baihaqi in Syu’ab al-Iman, al-Khatib al-Baghdadi in al-Rihlah fi Talab al-Hadist, Ibn Abd al- Barr in Jami ‘al-‘Ilm and al-Daylami in Musnad al-Firdaws.

The message of the prophet was fully appreciated by Vania Puti Mahsa, the sixth semester student of Agribusiness Study Program, Faculty of Science and Technology (FST) UIN Jakarta. Of the few countries that can be used as a destination, Vania chose to conduct community service (KKN) activities in china.

“China is one of the world’s oldest cultures, originating thousands of years ago, and I want to know what Chinese citizens think about Indonesia,” said Vania to UIN News Online, Wednesday (07/31/2019).

In addition, Vania also wants to take a closer look at the lives of Muslim communities in the country. In addition to carrying out the practice of Buddhism, Taoism, Confucianism and other local religions, China is one of the countries with a growing Muslim community in it. “I also want to know how Islamic civilization is in China,” she explained.

Armed with information obtained from the DemaFST Instagram account, Vania immediately registered the KKN program. After being declared to have passed the selection, Vania left for China in mid-July. She was stationed in the Chongqing area. It is known that Chongqing is one of the fourth largest regions in mainland China after Beijing, Shanghai and Tianjin. Chongqing itself is part of the west triangle economic zone, along with Chengdu and Xi’an.

While in China, Vania claimed to learn more about the lives of Chinese people while explaining Indonesian culture to them. She, along with her friends from FITK UIN Jakarta initiated several programs such as a program “Sharing Culture” program. This program is designed to introduce and teach Indonesian culture and arts such as Saman Dance, folk songs, wayang (puppet theater), and handicrafts.

During this time, she continued, many people thought that the Chinese community was very individualistic, but actually, it was not. “What I feel here is that everyone is very kind and friendly with me, they really appreciate foreigners like me,” she said.

As a Muslim, Vania is also often faced with many questions about the veil she uses. Their questions are usually about what the headscarf, functions, and Vania’s reasons for using it. “And they really appreciates the answers,” she explained. (usa/vpm/zm)