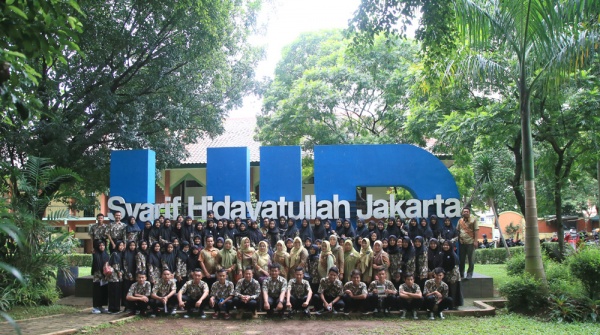 Diorama Room, UIN NEWS Online – A total of 120 11th graders from SMA Persatuan Umat Islam (PUI) Cirebon, West Java, Wednesday (14/12/2017), visited UIN Jakarta campus. The visit was held in order to study campus and fill the school holidays. Besides the students, the entourage was also accompanied by a number of teachers of study and school officials.

Students arrive on campus around 09:00 straight from Cirebon using two buses. The delegation was welcomed and received by the Head of Publication and Documentation Division of Feni Arifiani MH and a number of staff in Diorama Room.

Representative of SMA PUI, Roseta SPd, in his speech said the visit of the students and teachers he led to the UIN Jakarta campus aims to introduce the academic world of college. Although still to enter higher education, but the students are expected to prepare themselves early on in selecting colleges and study programs that they are interested in.

“In terms of time, the 11th graders are not yet the time. However, we hope the visit and introduction of the campus can be a knowledge for them in the future, “he said.

According to Roseta, between the current year’s graduates of SMA PUI Cirebo, nobody goes to UIN Jakarta. Aside of the lack of information, students also prefer universities under the nearest Ministry of Religious Affairs, such as IAIN Cirebon, UIN Bandung or IAIN Pekalongan, Central Java.

Therefore, he said, in the future it is expected that there will be more PUI high school graduates who continue to UIN Jakarta.

Meanwhile, Feni Arifiani explained, UIN Jakarta is one of the famous Islamic universities in Indonesia and even at the international level. UIN Jakarta has 12 faculties, including postgraduate, with 58 courses, both religious and public.

The selection of entry into UIN Jakarta is done through five lines, namely SPMB Mandiri, SBMPTN, SNMPTN, SPAN PTKIN and UM PTKIN. Outside the entrance, there is also a new student acceptance through the scholarship path of cooperation with the local government.

As for tuition fees, Feni explained, since last year UIN Jakarta has implemented a single tuition system (UKT), which is a fair and proportional payment system between capable and less able students.