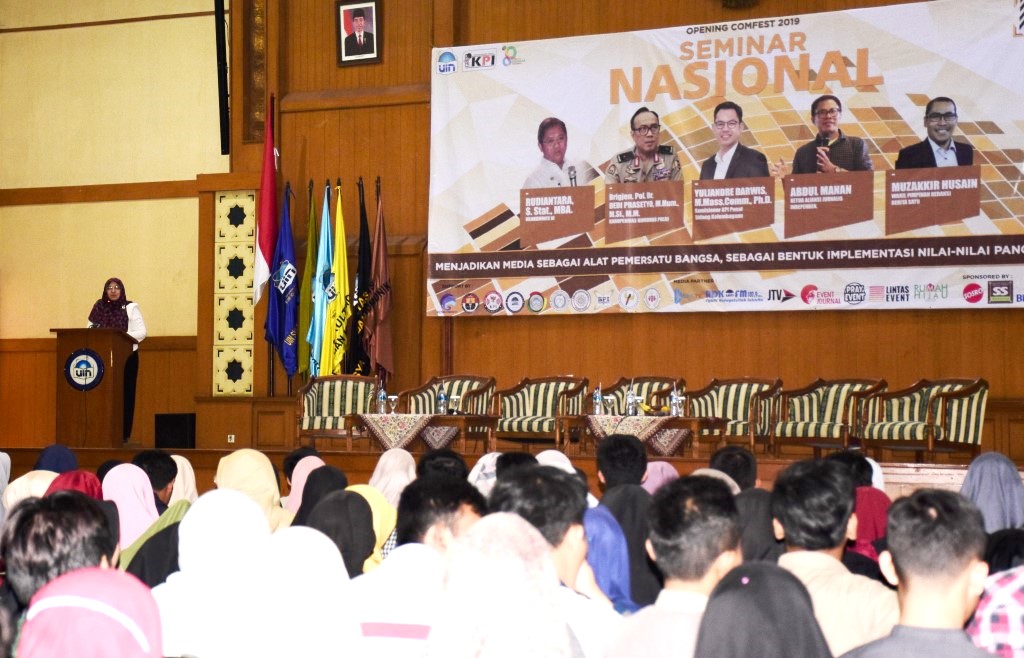 The event, which was attended by the entire academic community of FIDK UIN Jakarta presents several speakers, among them are Rudiantara (Communication and Information Minister of the Republic of Indonesia), Agung Suprio (Chairman of the Indonesian Broadcasting Commission), Najwa Shihab (Founder of Narasi TV), Muhammad Iqbal (Head of Public Relations of the National Police Headquarters), Muzzakir Husain (Berita Satu Deputy Chief Editor), and Abdul Manan (Chairman of the Independent Journalists Alliance).  Also present in the event, Rector of UIN Jakarta Amany Lubis.

Amany Lubis in her remarks expressed her gratitude hopes that this activity can provide positive contribution to the students of UIN Jakarta.

“There are many positive things we can get from this event, so please take it seriously. Hopefully we will be able to become media users in accordance with the theme of this activity,” said Rector.

On the same occasion, Dean of FIDK UIN Jakarta Suparto in his speech said that the implementation of the event is the result of the students’ creative ideas in responding to various media developments.

“Hopefully this activity will goes according to the plan,” he said.

Meanwhile, chairman of HMJ KPI UIN Jakarta Farid Abdullah Lubis said that the 2019 Communication Festival was aimed at making UIN Jakarta students understand the central role of the media in the life of the nation and state, as well as to arouse critical thinking about the impact of a media.

“Not only limited to students, we also hope that this message is able to reach the general public, about the use of good and right media,” said Farid. (usa/lrf)