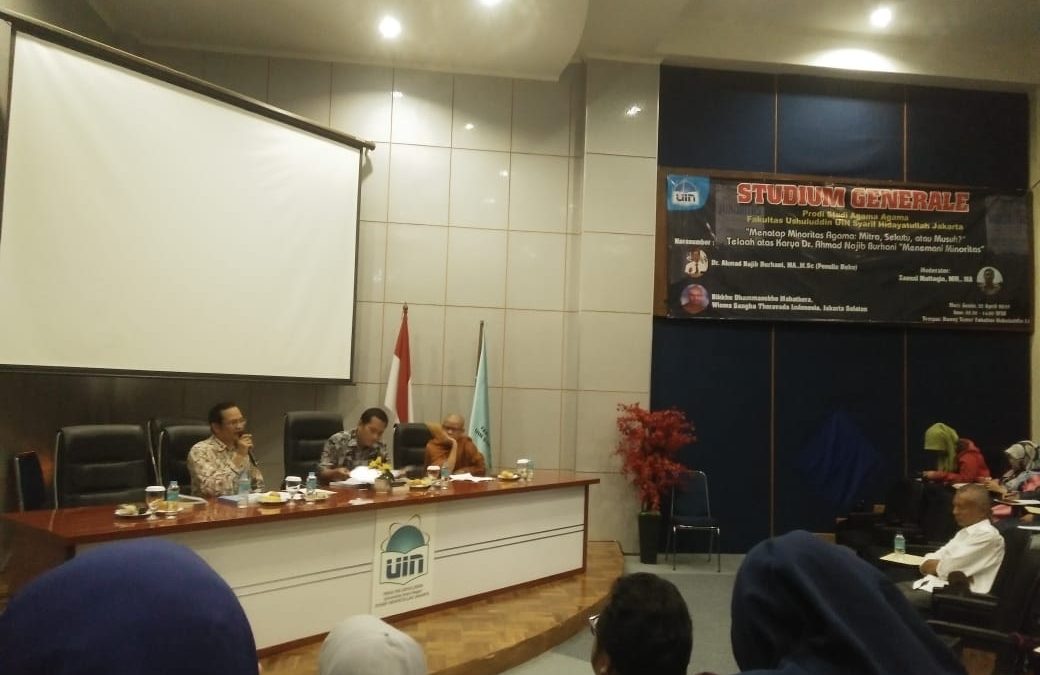 By raising the theme on “Menatap Minoritas Agama: Mitra, Sekutu, atau Musuh?”, this seminar aims to encourage the majority to respect the rights of minority groups in Indonesia present two speakers, they are Main Researcher of the Indonesian Institute of Sciences (LIPI) Ahmad Najib Burhani and Chairperson of the Council of Elders of Sangha Theravada Indonesia Bhikku Dhammasubho Mahathera.

Dhammasubho in his presentation said, although the guarantee of freedom of religious beliefs has been given by the state, the reality of discrimination is still found in minority social groups.

“Various social upheavals still appear in the midst of society. For example, the establishment of places of worship, even the funeral conflicts of this minority group can still be found today,” he said.

Both Najib and Dhammasubho are agreed that the paradigm of negative relations between the majority-minority needs to be eliminated. All elements of the nation need to put forward the attitude of one unity as a nation.

Dean of FU UIN Jakarta Yusuf Rahman also revealed that the existence of minorities has also been a concern of Muslim scholar. They emphasizes the minority groups as groups that are socially, economically, and even religious understanding is in a position that needs to be appreciated.

“Today’s public lecture is one of our efforts in addressing this matter.  As a Dean, will always welcome this kind of scientific activities,” said Yusuf.

Meanwhile, Expert Staff of the Minister of Religious Affairs Oman Fathurahman who was present also conveyed the information that the Ministry of Religion of the Republic of Indonesia is currently working on the Draft Law on Religious Community Protection (PUB Bill). This bill is being discussed by considering the input of scholars and religious leaders. The billis expected to produce accommodating regulations in managing the diverse religious life of the Indonesian people.

The PUB Bill itself, continued Oman, was born from the government’s desire to provide protection for religious freedom in Indonesia. Various forms of social conflict such as the expulsion of certain religious groups are no longer expected to occur. (usa)