FU encourages students to be more productive in writing 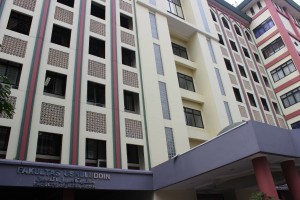 FU, UIN News Online – To encourage writing activity as a scientific tradition within the Faculty of Usuluddin (FU) UIN Jakarta, the leaders at FU encourages the students to be more active in writing. In addition, FU has also revitalized the Jurnal Gong to facilitate the students writing tradition.

This was said by the Vice Dean for Student Affairs of the FU Media Zainul Bahri during the FU lecturer semester meeting in the Partosentono AR Theater Room, Monday (08/26/2019). “We encourage students to actively write, and construct their ideas in scientific writing,” he said.

The writing, continued the Media, can be in the form of a review of religious social life as well as actual themes of interest. Besides opinion articles, students can also write them in the form of book reviews and others. “We will appreciate students who can write and publish it, whether in national or local mass media,” said Media.

“In the 1990s, this journal was the proud academic journal of UIN Jakarta students,” he added.

Writing tradition, explained Media, is a distinction between FU students and other faculties. It is known that several national productive writers such as Prof. Komaruddin Hidayat, Prof. Bakhtiar Effendi, Dr. Saiful Mujani, and Dr. Burhanuddin Muhtadi are alumni of FU UIN Jakarta. (usa/zm)