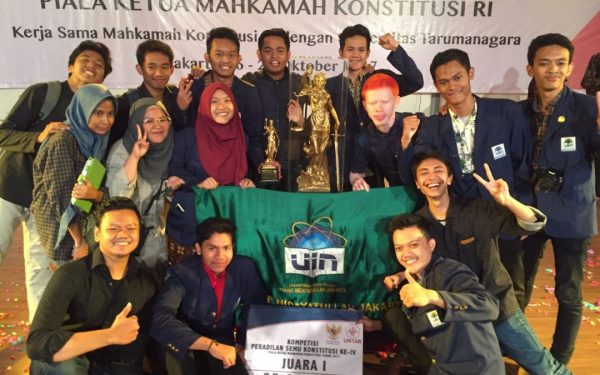 The team lecturer, M. Izhar Helmi MH to UIN News Online, Monday, (10/23/2017) said that the victory of MCC FSH UIN Jakarta team was obtained after they recorded a higher score in the settlement of judicial review. The appointed judges see the strategy of handling judicial review conducted by MCC FSH UIN Jakarta team is more perfect in terms of referrals and treatment.

“This victory is a milestone for the MCC FSH UIN Jakarta team to record the achievements in the Moot Court Competition,” he said.

He also added that MCC team of UIN Jakarta only has four months to learn various materials on moot court. Furthermore, they also have to compete in the preliminary round which is followed by 12 teams.

“Hopefully we can maintain our winning tradition and develop other achievements such as scientific papers, criminal or civil proceedings and so on,” said Zul Amirul Haq, Head of Debates Division MCC FSH UIN Jakarta who accompany the team during the competition.