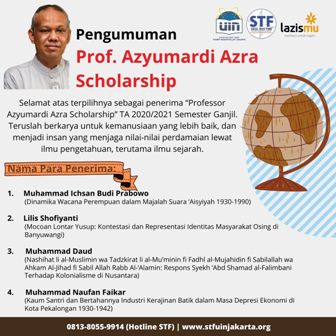 Rectorate, UIN News Online – Four master students who conducted their research on social history and Indonesian Islamic philanthropy from a number of universities won the Professor Azyumardi Azra Scholarship (PAAS) scholarship. PAAS scholarships are awarded by the Social Trust Fund (STF) UIN Jakarta, in collaboration with Masters in Islamic History and Culture, Faculty of Adab and Humanities, UIN Jakarta supported by individual donor partners and institutions such as the Infaq Zakat Institute and Shadaqah of Muhammadiyah or LAZISMU.

Based on the STF UIN Jakarta release, Thursday (09/03/2020), mentioned that the four PAAS scholarship recipients are Muhammad Ichsan Budi Prabowo, Lilis Shofiyanti, Muhammad Daud, and Muhammad Naufan Faikar. They received the PAAS scholarship after going through a strict selections process by setting aside dozens of other applicants.

Director of STF UIN Jakarta Prof. Dr. Amelia Fauzia congratulated the awardee and hoped that the scholarship would motivate them to produce the best work in history. She also expressed her appreciation for the support of many parties in providing this scholarship.

“This PAAS scholarship was created to encourage the study of Islamic history which is considered to be lacking, even though the current context is very important. We are very pleased with the attention of many parties who support the scholarship,” said Amelia.

Each of the awardee currently conducting quite diverse historical research. Muhammad Ichsan Budi Prabowo, for example, is doing research entitled “Dinamika Wacana Perempuan dalam Majalah Suara ‘Aisyiyah 1930-1990”. This theme attracted the students of the Master of History of Islamic Civilization, Faculty of Adab and Humanities, UIN Sunan Kalijaga by researching women’s discussions in the monthly magazine belonging to the Central Executive, ‘Aisyiyah, which has been published since 1926.

Meanwhile, Lilis is currently studying the identity of the Osing people, a native of Banyuwangi, East Java with a research entitled “Mocoan Lontar Yusup: Kontestasi dan Representasi Identitas Masyarakat Osing di Banyuwangi”. This research was carried out by Lilis to complete her studies at the Master Program in Cultural Studies, Department of Humanities, Faculty of Cultural Sciences, University of Indonesia.

And lastly, Muhammad Naufan Faikar wrote a historical research “Kaum Santri dan Bertahannya Industri Kerajinan Batik dalam Masa Depresi Ekonomi di Kota Pekalongan 1930-1942“. With this research, this student of the Master’s Program in Islamic History and Culture, Faculty of Adab and Humanities, UIN Jakarta wants to explore the role of the santri in the economy of the people of Pekalongan City as a batik-producing city during the world economic recession along with the World War II era.

It is known, PAAS is a scholarship program that was born from the joint initiative of STF UIN Jakarta with the Master Program in Islamic History and Culture, Faculty of Adab and Humanities, UIN Jakarta. The name of this program refers to Professor Azyumardi Azra, Rector of UIN Jakarta for the period of 1998-2006 as well as a historian who produce many influential works.

The PAAS scholarship itself is expected to further advance the Study of Islamic History and Philanthropy in Indonesia. The research topics that are the main focus of the PAAS scholarship are the field of history by covering the areas of Islamic Philanthropy, Islam and Social Movements, Daily Life of Muslim Communities, Islamic Education, Local Wisdom, and Local Ulama.

“We hope that this PAAS scholarship can encourage in-depth studies related to ulama, the role of students, the women’s movement, and local traditions,” said Amelia.

Each student application and research proposal submitted to receive a PAAS scholarship is selected based on preferences which can provide breakthroughs and novelty in advancing Indonesian Islamic History Studies. Others, PAAS scholarships are prioritized for master program students in history concentration who are doing final research. (usa/zm)