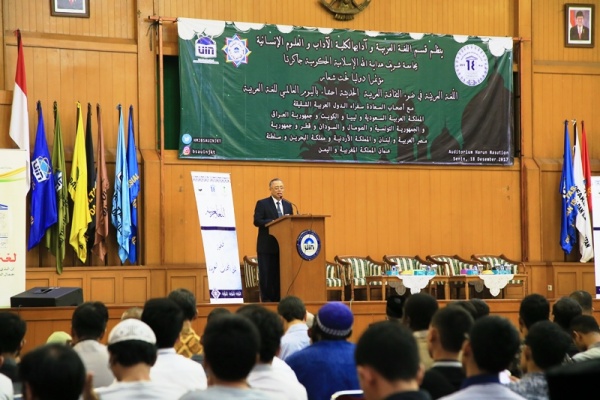 The event titled “al-Lughah al-Arabiyah fi Dhou’i al-Tsaqafah al-‘Arabiyah al-Hadithah” was held by FAH UIN Jakarta in collaboration with 16 embassies of Arabic speaking countries. Among them are the Kingdom of Saudi Arabiya, Egypt, Sudan, Qatar, United Arab Emirates and Syria.

Rector of UIN Jakarta Prof Dr Dede Rosyada in his remarks expressed his appreciation toward these activities. He hopes, the activities can be done routinely in UIN Jakarta in order to improving the academic quality for the students.

“We fully appreciate the activities. With festivals like this, students can get to know the language and the variety of Arabic culture,” he said.

The festival, which was attended by a number of ambassadors and consulates of Arabic speaking countries, attracted many students and lecturers to come. In addition to the seminar, the students also are absorbed in the books, foods, and Arabic culture exhibition. (usa)