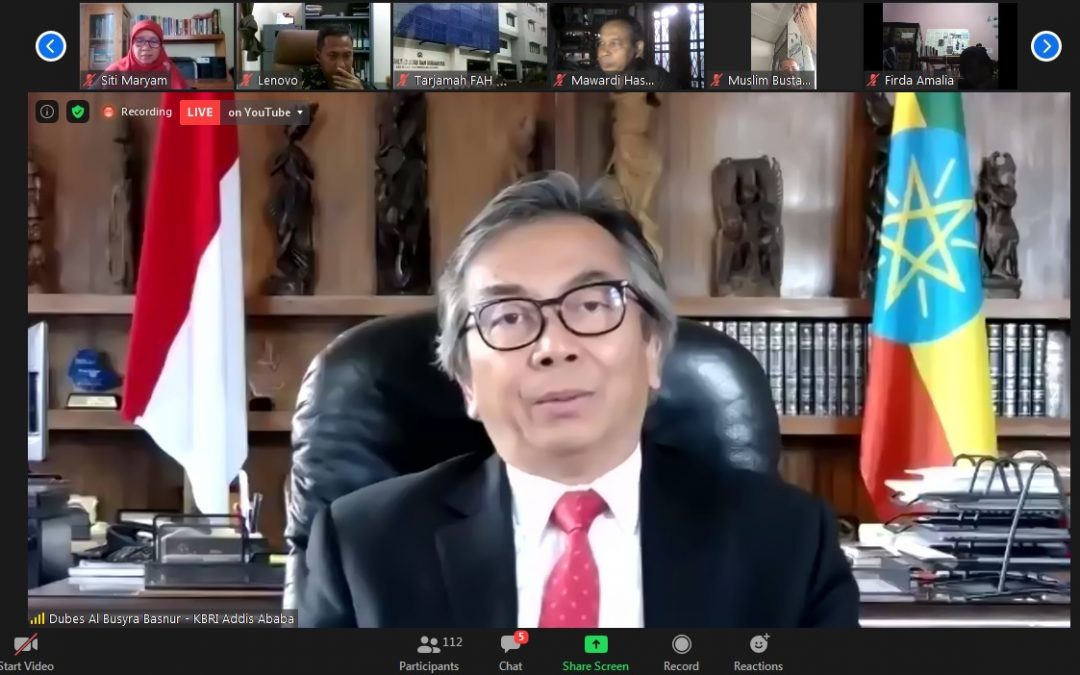 Moderated by the Head of History of Islamic Culture and Civilization department (SKI) UIN Jakarta Awalia Rahma, this event invites The Indonesian Ambassador to Ethiopia, Djibouti and the African Union Al Busyra Basnur as speaker. Also present in the webinar, the Rector of UIN Jakarta Amany Lubis and the Dean of FAH UIN Jakarta Saiful Umam.

Al Busyra in his presentation said that Ethiopia was the first hijra destination for the refugees of Mecca at the order of the Prophet Muhammad (PBUH).

“The prophet Muhammad (PBUH) advised a small group of his followers who suffer from persecution in the hand of the Quraysh to immigrate to the kingdom of Aksum in northern Ethiopia,” he said.

The group, he continued, founded a mosque known as the An-Najash / Negash mosque which is the oldest mosque in Africa and is still standing today.

“Many of the Muslims stayed in the country until they died and were buried in the town of Negash,” said Al Busyra.

According to Al Busyra, on the 14th century, there were seven Islamic kingdoms in the region, one of which is the Harari Kingdom.

“Harar is one of the cities in Ethiopia that maintains the cultural heritage of the Islamic kingdom and recognized by UNESCO as a world cultural heritage and has been named the 4th holy city of Islam after Mecca, Medina and Jerusalem,” he added.

Furthermore, he said that the bilateral relationship between Indonesia and Ethiopia were marked by the presence of the Ethiopian delegation to the Asian – African Conference in Bandung, in 1955. Until now, the bilateral relations between the two countries have grown stronger.  This is evidenced by various collaborations including state visits, interfaith dialogue, and scholarships program. (usa)