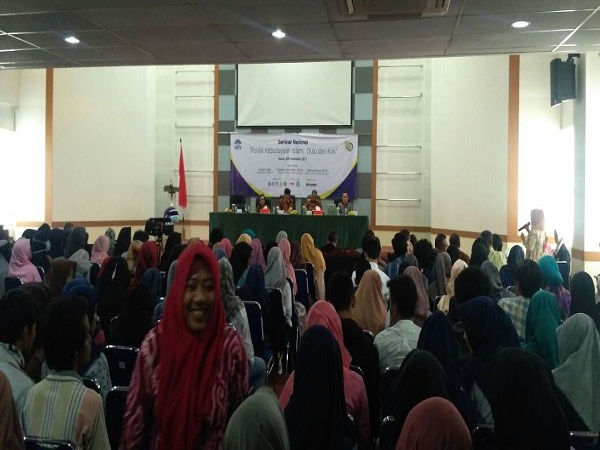 According to Darsita MA as Chief Executive Officer of this anniversary event said that the event was as part of FAH anniversary series. “The event, which was held since last October 25, 2017, has been held its Southeast Asian Cultural Festival which filled with intercultural competitions, international and National Seminar,” she explained.

Meanwhile, according to Yaniah, as Muslim intellectuals we have big responsibility for the continuity of Islamic civilization in the future, but to take a concrete attitude this depends on how far we can respond to civilization and Islamic culture in the past and present.

“Because it is so important, Iqbal classify it as a form of scholarly resources. He said that history is a kind of big gramophone in which the voice of the nations is recorded, “he said.

At the same place, in his explanation, Jajang said that in the various Islamic civilizations, there were conflicts related to the difference between civilization and culture, therefore the writer needed to give limitations on the discussion so it reach its objective of reflecting Islamic civilization; in the past, present and future.

“The word civilization (Indonesia) is often absurd with the word culture. So in this case, civilization has two meanings, i.e.: the process of becoming civilized, an advancement form of society that is characterized by symptoms of progress in the field of socio-political, art-culture and technology, ” Jajang explained.

In the event, Haidar explained about the past history of Islam, which of course not all of its history in cheerful which always in well progress and golden. However, in general it can be stated that, the people of the khilafah were truly admired and respected by enemies of Islam. Not to mention they always used as a reference in the development of Science.

“In other words, Muslims in the past has made fine progress in various fields, both in the field of development, science, and culture,” he said. (usa-im)