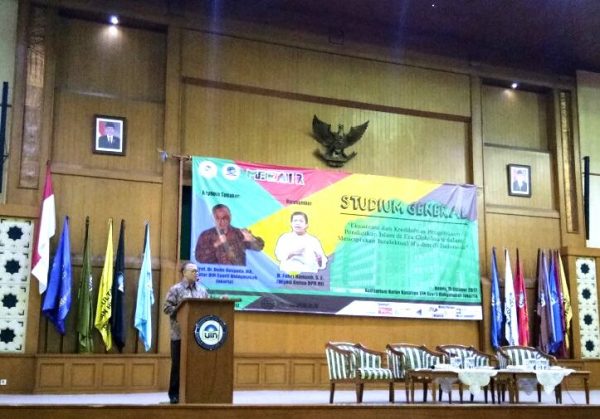 This event was attended by H Fahri Hamzah SE (Vice Chairman of DPR RI) which was represented by Edi Kurniawan (DPR RI expert staff) as a keynote speaker.

“Education management graduates are expected to be able to become reliable managers in the madrasa where they will be working, and to change the face of education in terms of managerial to be better,” said Rector.

According to Rector, MP graduates are also expected to encourage the Head of Madrasa in issuing the strategic policies. “Managerial skills which are the main foundation in building a good and competitive education institution are Planning, Organizing, Accounting, and Controlling. Good managerial skills will affect the quality of the school,” he added.

On the same occasion, Rector also said that UIN Jakarta has gained international recognition from ASEAN countries. Therefore, UIN Jakarta graduates will be easier to apply for jobs in those countries.

“Responding to these opportunities, students should continue to equip themselves with both language and soft skills,” said Dede.

At the end of his speech, as a graduate of Islamic college, rector advised the alumni to remain sincere in doing their works.

“By quoting al Quran 47: 7 which reads; O you who have believed, if you support Allah, He will support you and plant firmly your feet,”. Therefore, keep the professionalism and do the best for the religion and our beloved Nation,” said the Professor of Education Methodology of UIN Jakarta. (usa)